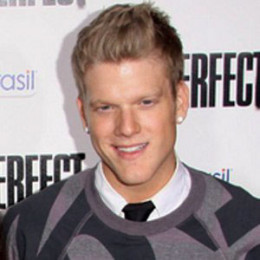 The three times Grammy Award-winning singer, Scott Hoying is the founding member of the group, Pentatonix. He is a songwriter, and pianist as well. He started his career in music and is the member of SoCal VoCals. Apart from this, he announced himself being pansexual and is possibly single in the present days.

Scott Hoying was born on 17th September 1991 in Arlington, Texas under the birth sign Virgo. He is American as per nationality and is of White ethnicity. His parents raised him with his sister, Lauren.

Hoying finished his schooling at Martin High School. He studied with Mitchell Grassi and Kristin Maldonado in the high school. He then attended the University of Southern California to earn a degree in music but was dropped out.

Hoying from the very early age of 8, used to perform and was interested in music. He, Grassi, and Maldonado decided to form their own band. The trio started performing in various programs and events.

Scott Hoying, in the middle of his graduation, became the member of SoCal VoCals. The group is a Cappella group as a baritone vocalist. He then gave an audition for The Sing-Off where he tried to convince his friends to join him to form a band.

Hoying with his collogues formed a group named, Pentatonix. The band gave the audiences many harmonic songs like Born to the Wild, Piece of My Heart, and Let’s Get It On among others.

In 2012, Hoying started working with Madison Gate Records which released the group’s first EP named, PTX Volume 1. With the release of the second album called, That’s Christmas to Me he turned out to be a songwriter as well.

In addition, he also created a YouTube channel named, SUPERFRUIT which has more than 2.5 million of subscribers and millions of views too.

Scott Hoying announced himself being a pansexual after Miley Cyrus opened herself the same. Generally, Pansexual is a person who gets attracted towards all types of transitions, transgender, androgynous and gender fluid people.

Currently, Hoying might be in a relationship with Mitch Grassi as per his post on the social media site. The couple together also created a YouTube channel named, superfruit. However, they have not revealed anything regarding this so, he might be possibly single.

Hoying mostly songs were entered on the Billboard and the US chart. Along with this, His album, That’s Christmas To Me was platinum certified and two years later was certified twice. In addition, his original album, Pentatonix sold 98k units and was even certified gold by RIAA.

Hoying not only earns from his albums and songs, but also from his two YouTube channels, scotthoying, and superfruit that earns $415-$6.6k and $16.8- $268.8k respectively.

Besides earning, he is also involved with various charities and donation. He raised a good amount of Mass General Cancer Center.