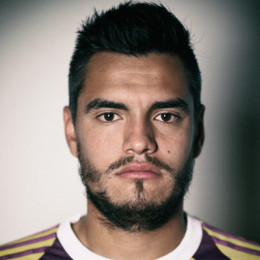 Sergio Germán Romero is an Argentine football player who plays as a goalkeeper for Sampdoria and the Argentina national football team. He has got the nickname of “Chiquito” which means small due to his smaller stature in comparison to his siblings, who today are basketball players. He started his youth career with Almirante Brown.At the age of nineteen he signed his first professional contract.

Sergio Romero was born Sergio German Romero on February 22, 1987, to father, Ramon Romero. His brother Diego is a professional basketball player. Romero's nickname is Chiquito because he is comparatively shorter than his brother who stands at a height of 6 feet 9 inches.

At the age of 9, he enrolled at the youth academy of Almirante Brown and after a year moved to CAI. He then joined Racing Club playing in the youth squad and eventually was promoted to the first team in 2006 which marked his debut in the Argentine Primera Division. He was benched for the entire 2005-06 season and finally made his debut in the 2007-08 season against Nueva Chicago. Following the match, he was again sidelined as Gustavo Campagnuola was chosen as the first choice keeper.

He then moved to Dutch club AZ on March 24, 2007. Due to the injury of first choice keeper Boy Waterman, he got the opportunity to start for AZ and appeared in his first game on September 30, 2007, against Heracles Almelo which ended in 2-1 in favor of the opponent. In his second game, he kept a clean sheet against Twente.

It was the turning point of his career as he became a regular member of the first team. He cost his team the match in the quarter-finals of the KNVB Cup, and after the game, he poured his frustration by punching the walls and doors of the changing room.

As a result, he broke his bones ruling him out of the squad. Due to the injury, he was benched for rest of the season as his team went on to win the Eredivisie. He played a total of 90 games for the club.

Romero Signed a four year deal with Sampdoria on August 22, 20011 for a fee of €2.1 million. At the time he had joined the club was playing in Serie B after being relegated and Romero said that he aimed to help the club reach Serie A. His debut match was a 2-2 draw against Padova. He appeared in 74 matches for the club. He was sent on a season-long loan to Monaco, played a total of 9 games.

On July 27, 2015, he transferred to English Premier League club Manchester United on a free transfer. He debuted for the Red Devils on August 8, 2015, in a 1-0 victory against Tottenham Hotspur. He kept a clean sheet for three league matches.

After the return of David de Gea, Romero became the second choice keeper. However, he was the first choice keeper in the cup competitions.

Romero made international debut representing Argentina U20 squad at the 2007 FIFA U20 World Cup and 2007 South American Youth Championship. He also played in the 2008 Summer Olympics football tournament.

He made his senior team debut on September 9, 2009, against Paraguay in FIFA World Cup qualifiers. With Argentina qualifying for the 2010 World Cup, Romero made World Cup debut against Nigeria, keeping a clean sheet.

You May Like: American Football Safety Jordan Poyer's Married Life

He also represented Argentina in the Copa America and 2014 FIFA World Cup. He missed out 2018 FIFA World Cup due to a knee injury. He has appeared in more than 94 international games making him the highest capped goalkeeper in Argentina's history.

Sergio Romero has accumulated an estimated net worth of $8 million. He earns an annual salary of $3 million. As of 2018, his current market value is $5.2 million it dropped from $7.3 million.

He is married to a beautiful model, Eliana Guercio. They dated each other for a long time and finally got married. They have two children together namely Yazmin Romero and Chloe Romero. They seem to be happy with each other and are often seen together with their children during their holidays or weekends.

There is no information regarding his extra affairs or marital relationship. He seems to be loyal to his wife.

Romero's favorite food is Fugazzeta. In free time he likes to play video games with his kids and watch movies.

She is a professional model. She is happy with his star player husband and her children.

She was born healthy and is happy with her romantic and perfect parents.

She is almost like her father. There is no information regarding her birthday.