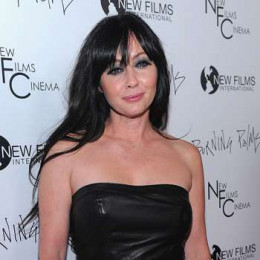 Shannen Maria Doherty is an actress, producer, author, and television director, well known to the public for playing the role of Brenda Walsh in Beverly Hills, 90210 and as Prue Halliwell in Charmed. Besides, she has appeared nude in Playboy magazine for two times.

Walking into her personal life till now she has been married three times. Her first two marriages didn't work so well and also was for a short period of time. So, what is her current relationship status? Is she single or moved on with someone new?

Shannen Doherty, the 5 ft 2 inches tall icon is enjoying her third marriage with her photographer husband, Kurt Iswarienko. The cupid's lavish marriage ceremony was held on 15 October 2011 in Malibu, California. The intimate ceremony was attended by their co-stars, friends, and family members.

Though she has been married several times, yet she does not have any kids. Currently, she lives on a horse ranch in Ventura County, California with her husband. Despite being in a conjugal relationship for eight years, the lovebirds never had any children or been pregnant.

Prior to moving on with Iswarienko, the Beverly Hills 90210 cast tied a knot with Ashley Hamilton, an American actor, comedian and singer-songwriter from October 11, 1993, to April 1994. He is well known for starring in Iron Man 3, Beethoven's 2nd, and Cats Dancing on Jupiter.

In the rise of 1993, Doherty was shortly engaged to Max Factor heir Dean Jay Factor before he filed for a restraining order on 25th May of the same year.

Later then, the starlet hitched American poker player, Rick Salomon in 2002. Sadly, the wedding was annulled after nine months in 2003. he reported threats and physical violence against Shannen though the abuse came from Factor and not her.

The Jenny Wilder in Little House, Shannen Doherty revealed she was diagnosed with stage four breast cancer on February 4, 2020. The actress uncovered a new struggle which she's kept out of the public eye.

"It's going to come out in a matter of days or a week that-- I'm stage four. My cancer came back. And that is why I'm here". Doherty told ABC News' Amy Robach on "Good Morning America". "I don't think I've processed it. It's a bitter pill to swallow in a lot of ways".

The 48-year-old opened up about her breast cancer's recurrence and how she's coping with it. Her first reaction is always concern about how she is going to her mom, her husband.

"I definitely have days where I say why me. And then I go, well, why not me? who else besides me deserves this?

The BH90210 star was diagnosed with cancer in March 2015, nevertheless, two years later said she was allegedly done with chemo and feeling great. She has always been candid about her disease by documenting her battle in social media.

This time around, Doherty decided to keep the owe the news to herself and despite the diagnosis, went back to work on the set of the "90210" reboot, just four months after her co-star Luke Perry's passing.

Bryan Austin Green, her BH90210 co-star was the only person in the group Shannen says she told. Bryans calls her and says "listen, whatever happens, I will have your back". She leaned on Green to help her get through grueling, 15-16 hours long filming days on set.

How Much Is Shannen Doherty Net Worth?

As of February 2020, the Memphis, Tennessee born performer possesses a net worth of $10 million. She receives a salary of $3-$5 million per annum from her profession. Earlier in 2019, Shannen sued State Farm for not paying a $1.4 million claim on her house which was damaged by wildfires in California.

Amid an interview with Entertainment Weekly, Doherty confessed her less-than-stellar money habits. He was having a reported $36,000 in debt at age twenty-two. Shannen also added she's really fed up with people guessing how much she makes and when it goes wrong. She actually makes more than $12,000 a week.

In 2015, Doherty charged a management firm for mismanaging her money causing her to become uninsured. Unfortunately, once she received her insurance back, she was diagnosed with breast cancer. The performer later dealt with the accountants.

Shannen Maria Doherty was born on April 12, 1971, in Memphis, Tennessee to Rosa Elizabeth Doherty and John Thomas Doherty. Her mother is a beauty parlor owner, and her father serves as a mortgage consultant.

Shan has ancestry of English, Scottish, Irish and remote French. The Voyagers! actress was brought up in her mother's Southern Baptist faith.

His actual name is Ashley George Hamilton Collins, who by profession is an actor, singer and songwriter. He was married to Doherty for less than a year.

He is the second husband of Doherty, who is a professional poker player. Their marriage was annulled after nine months.

He is the third and current husband of Doherty, with whom she has been enjoying her marital relationship since 2011. He is a photographer by profession.