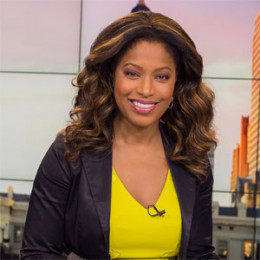 Sharon Reed is a well-known American media personality. She currently serves as the news anchor in "CBS 46" and is most recognized for her immaculate news delivery. She anchors the news at 4, 5, 6, 11 pm alongside Ben Swann at WGCL since 2012. She is happily married and a proud mother to her daughter, Ava.

Sharon Reed was born in the United States of America. She holds American nationality and belongs to African-American ethnicity/race. She is a graduate of Georgetown University. Later she acquired her Master's degree in Journalism from Northwestern University's Medill School of Journalism.

Sharon Reed began her career as an on-air correspondent at the syndicated radio program 'American Journal.'  Later, She went on to work on  WOIO/WUAB (Cleveland), WCAU (Philadelphia), WSVN (Miami), and WMAR (Baltimore) where she stayed for ten years.

In 2005, she joined the Cleveland Cavaliers as sideline reporter where she served for nearly seven months. Currently, she works at Meredith Corporation which she joined in October 2012. She presents the news at  WGCL CBS affiliate in Atlanta and also anchor news at 4, 5, 6, 11 pm alongside Ben Swann. She is a member of CBS 46 Investigates team.

Sharon Reed is happily married to her longtime partner, but she hasn't revealed the name of her husband. She is blessed with a baby girl, Ava born on November 27.

She often posts pictures of her daughter on social sites with beautiful captions. As per sources, Reed is enjoying her blissful married life with her husband and daughter.

Previously, she was romantically linked to LeBron James, a professional basketball player and many speculate she has a child with him but she shut down all the rumors  while speaking at the AJC Radio saying,

“There’s no baby with LeBron. I wish him the best.”

Reed once got into controversy after posing nude for a certain artist's project.

Sharon Reed is a successful news presenter who has earned not only popularity but also an impressive net worth. She works for CBS which is one of the richest and reputed news channel.

The average salary of CBS news anchor ranges from $73,368-$79,032 per year. She hasn't revealed the exact figure of her net worth but keeping her salary in mind; she might have the net worth in six to seven-digit figure.

There isn't much information revealed about the husband of Sharon Reed. He has a daughter with Sharon.

Ava is the only daughter of Sharon and she is as beautiful as her mother. She lives with her parents.