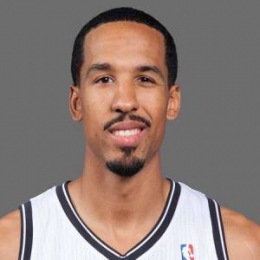 Shaun Livingston is a veteran player of the National Basketball Association with over ten years of experience. Livingston who plays at point guard and shooting guard position is currently signed with Golden State Warriors. He is a three-time NBA champion.

Shaun Livingston is married to his longtime girlfriend Joanna(Joey)Williams since August 2017. The couple tied the knot in a small ceremony and Shaun's father served as the best man. 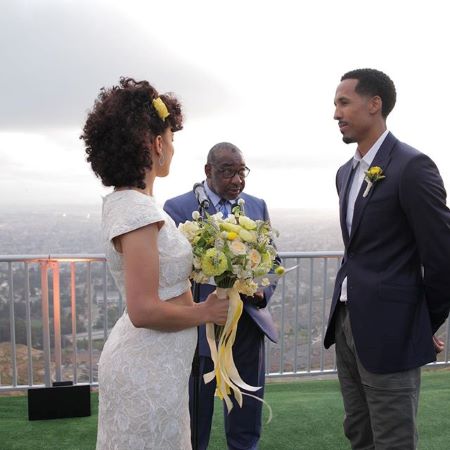 Shaun Livingston with wife Joey Williams on their wedding day.

The ceremony was attended by guests such as Stephen Curry and Andre Iguodala, however, the couple was unaware they were attending the wedding. They were told about the wedding through an announcement during the party.

Livingston was previously linked to adult actress Angie Marie(Angela Marie Bennett), however, there was no confirmation about this rumor from the couple.

Livingston does not always make headlines because of his love life. He became the center of media attention in 2007 when he suffered from a serious knee injury during a game against Charlotte Bobcats. It took him one and a half years to recover from that accident. Check out the video of that accident below:

Shaun again came into limelight in April 2016, when he donated $1 million to his former grade school, Concordia Lutheran School, in Peoria, Illinois.

This statement shocked his fans as his contract with Golden State Warrior only ends in 2020. However, he calmed his fans this week by saying he's in no hurry to decide on his future.

What is Shaun Livingston's Net-worth? Know more about his wealth, Earning and Salary

Shaun Livingston's net worth is $16 million which he earned by playing basketball in different teams of the National Basketball Association (NBA).

Previously, he was signed with Brooklyn Nets for $1,265,977/yr. Similarly, he earned a six-figure salary from other previous teams as well.

Livingston purchased a house in Los Angeles, California in 2011 which was worth $2 million. He currently lives in that house with his family. Speaking of Family, Shaun's spouse Joey is a former model and a businesswoman and boasts an impressive net worth of her own.

Shaun is a Lutheran, a true follower of Martin Luther King. Besides this, he donated $1 million to his former grade school, Concordia Lutheran School in Peoria, Illinois.

The Peoria, Illinois born basketball player announced his retirement from the NBA on 13 September 2019. Shaun stated, "After 15 years in the NBA, I'm excited, fortunate, sad and grateful all in one breath. Hard to put into a caption all of these emotions it takes to try and accomplish your dreams".

Shaun Livingston was born on September 11, 1985, in Peoria, Illinois. His father's name is Reggie Livingston and his mother is Ann Wyman. He is of African-American heritage. His parents divorced when he was 15 years old. At first, he was in custody of his mom and later in custody of his father.

5 rounds of the minion ride, 4 character photos complete with side eye and uncertainty, 3 “come to Jesus” moments, 2 minor meltdowns, and 1 ice cream cone. We survived our first theme park experience as a fierce family of four. I love creating these memories that will be just as nostalgic for my girls as they were for me as a kid. #universalstudios #thelivingstons #wewerebrave

He attended Concordia Lutheran Grade School and later graduated from Peoria Central High School. He started playing basketball from high school so instead of going college, he decided to further his career in basketball and joined the NBA.

Joanna and Shaun married in his house on the West Coast among family and Friends. The wedding guests were not aware of the wedding until it was announced at the party.

She is the first child of Shaun and Joey. she was born before their wedding. she has a younger brother.

He is the second child of Shaun and Joey. He has an elder sister. He was born in 2019.