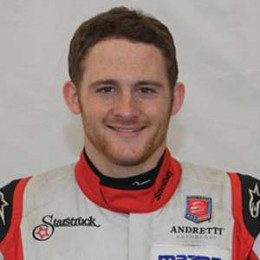 Who Is Shelby Blackstock Dating?

Shelby Blackstock, the celebrity kid is currently dating Esthetician Marissa Branch. They have been kindling romance since early 2016.

Notably, Blackstock and his sweetheart are quite protective of one another and rarely speak about their relationship in front of the media.

Even though the pair rarely speaks about their love life, they don't lag sharing pictures on a social media platform. They prefer to spend quality time together while in the meantime.

Furthermore, Shelby and Marissa celebrated their second anniversary in May 2018 and never misses showing affection to his partner. The lovebirds have been together for four years now.

Shelby Blackstock possesses an estimated net worth of $8 million as of March 2020. In addition, he bagged a huge amount of revenue from professional career as a car racer.

According to some genuine sources, racing drivers make $5000 to $7000 per race, especially through sponsorships. Shelby was brought up in a celebrity family.

The athlete is a son of country singer Reba McEntire who has a net worth of $95 million. Reba maintained her stardom for three decades. She starred in more than eleven movies and appeared in the hit Reba TV show for six consecutive years.

As of now, the racer resides in a house worth $7.9 million on Cherokee Dock Road in Lebanon with his girlfriend Marissa.

Like Shelby, his father Narvel is also spending a blissful live-in together relationship with a partner, Laura Shroud.

Shelby Blackstock was born on 23 February 1990 in Nashville, Tennesse to singer Reba McEntire and guitarist Narvel Blackstock. His birth sign is Pisces. Shelby is 5 ft 10 inches tall and weighs 73 kg.

Shelby has two older siblings Shawana and Chassidy Blackstock. He has a half-brother Brandon Blackstock, who is married to Kelly Clarkson.

Blackstock had a passion for car racing since the early days, so he pursued the same field even after he grew up. As a matter of fact, he dropped out of Bob Bondurant race school to chase a full-time career in racing.