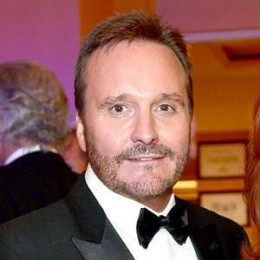 Narvel Blackstock is an American television producer. He was born in Tarrant County, Texas, USA as Narvel Wayne Blackstock. The Tarrant County born actor is well known for his work on films including Malibu Country, Secret of Giving and Blake Shelton’s Not So Family Christmas.

Narvel Blackstock is an American television producer. He was born in Tarrant County, Texas, USA as Narvel Wayne Blackstock. The Tarrant County born actor is well known for his work on films including Malibu Country, Secret of Giving and Blake Shelton’s Not So Family Christmas.

Narvel Blackstock, an eminent American actor is in a relationship with the love of his life, Laura Putty Shroud. By profession, Miss Laura is a real estate investor but it's still unclear where and which company did she worked for.

Blackstock started dating Shroud in mid-2016. The duo has been together since McEntire divorced Narvel. Furthermore, Laura is not just the darling to Narvel, in fact she has been a best friend of Reba for years.

Shroud accompanied McEntire for many times on her son Shelby's car racing competitions. Probably, the reason behind Narvel and Reba's split is Shroud's closeness to her husband.

As of March 2020, Narvel and lover, Laura are living a blissful life with no rumors of separation. Assuming the snaps shared by Laura, she and Blackstock are truly made for each other. They have been living together for five years now.

Needless to say, Narvel Blackstock married and divorced twice in his life. His first marriage was to Elisa Gayle Ritter. They walked down the aisle on 30 March 1973. They were young lovers. At that time, Narvel was an aspiring guitarist.

Elisa was only Narvel and Elisa was only seventeen years when she wed Blackstock. They were blessed with three adorable kids. Elisa, as well as, Narvel was so secretive that pictures of the two are rare. They divorced in 1988 after living as husband-wife for fifteen years.

Narvel started dating his colleague and Reba McEntire in 1989. They gave birth to a son, Shelby Blackstock on February 23, 1990. They tied a knot at Lake Tahoe on a boat in a private ceremony.

The pair furthermore adopted three stepchildren namely-Chassidy, Shawna and Brandon (husband of Kelly Clarkson). In August of 2015, Blackstock and McEntire announced they had been separated for a few months after two decades of the wedding.

McEntire, the country singer shocked her fans while she disclosed divorce with her husband of twenty-six years. In December of the same year, McEntire said their divorce had been finalized the divorce on 28 October 2015. Regardless of the tragic split, Reba maintained good bond with her three step-kids.

Months after the major issue, some sources claim that Narvel kindled a romance with one of their mutual friends. Even, the Nashville country agent said "they're very serious".

It's totally unclear how and when things began but sources reported they are getting hitched soon. Prior to a tragedy, the trio had good times together. Shroud and McEntire were once pictured together at Katy Perry's concert wearing colorful wigs.

Narvel Blackstock has an estimated net worth of $500,000. He pockets a reasonable amount of money from his career as an actor. Narvel came to the spotlight just because of his romantic relationship with country singer Reba McEntire.

Till today's date, Narvel appeared in short movies and music videos like Reba: Video Gold II, Malibu Country, and Forever Love. He often shared the screen with ex-spouse McEntire. Blackstock probably made $35,000 to $170,000 per hour.

His firs wife is Elisa Gayle Ritter. There is no any information about his first wife but he has three children from his first wife. The reason of their divorce was not revealed.

Shawna is the first child of Narvel. There is not much information about her on the internet.

Brandon is the second child from his first wife. He is attached to the singing career and is married to Kelly Clarkson.

Chassidy Celeste Blackstock is the third child of Narvel. There is not much information about her on her internet.

Shelby Blackstock is the youngest son of Narvel. He is an American racing car driver.