American fitness instructor, Shemane Nugent is best known for her work in the health and fitness sector as an instructor for over three decades. She is also known as an author of famous books like 'Married to a Rock Star', 'Kill It & Grill It', and '4 Minutes a Day, Rock 'n Roll Your Way to Happy...' She won the 'International Zumba Fitness Presenter' award and was also named as 'Detroit's Most Physical Female'.

Shemane Nugent is married to the famous American singer-songwriter, guitarist and political activist, Ted Nugent. The duo shared the wedding vows on January 21, 1989, in presence of their close of friends and family.

Famous fitness instructor Shemane Nugent and her husband Ted Nugent at their wedding.

All things for the duo started when they first met each other on Detroit's WLLLZ-FM studio. Ted was invited as a guest on the show whereas Shemane was a member of the news staff. Eventually, after a couple of meetings, they started dating and ever since then they are together. Further, they recently celebrated three decades of the marital relationship.

Headed to the Sportsman’s Expo in Salt Lake City! See you at the Hunter Nation booth! #hunternation

The couple is a blessed parent of their only son named Rocco Winchester Nugent. Besides, Shemane is a stepmother of 4 children who were born from the previous relationships of her husband.

The pair currently living a healthy relationship and shares a good bond. As of 2019, the relationship between them looks fluid as there is no sign of divorce between them. Additionally, she is an active social media personality where she shares many posts regarding her personal life and professional life.

Are Shemane and Ted Nugent Divorced?

Undoubtedly, this is first to Deziel but second to Nugent. Despite being a stepmother to four kids from her spouse's estranged relationship she treated them well as her own kids. In addition, Nugent paid $3,500 monthly in child support. 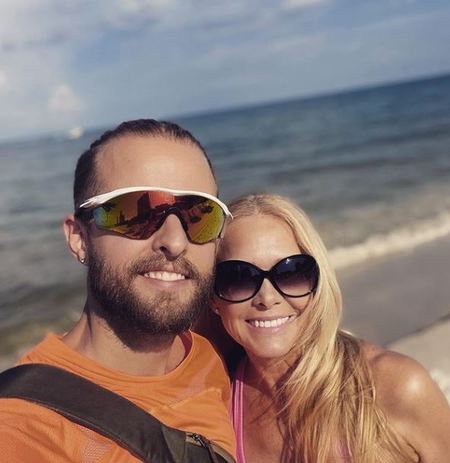 Most notably, the fitness enthusiast and her spouse notably crossed three decades of their conjugal relationship today. Some of the common things between the duo that bring them closer are skiing, lover of dogs, being adventurous, and being bookish.

Neither of the pair ever misses sharing the moments they've spent together and also flaunts their love affection via social media. On 12 February 2020, Shemane took a video on her Instagram wall that includes herself and her husband Ted telling them they are doing a podcast together.

What is the Net Worth of Shemane Nugent? Know about her Earnings, Salary

Shemane Nugent's net worth lies somewhere between $2 million. She collected that fortune while working as a television personality and fitness instructor. In addition, the average salary of a fitness instructor is $36,426.

Happy President’s Day! What an honor it was to visit the White House and have dinner with President Trump in 2017! He was so welcoming and took the time to give us an in depth tour. Dinner was phenomenal, of course. It’s been so long though. I think we need to go again! #presidentsday #maga

At the starting of her career, Nugent worked as a fitness instructor for giving classes around spinning, boxing, body pump, fitness yoga, and kickboxing. What's more, she worked for over three decades in the field and gathered quite a love and fame through her works.

Shemane is also an author who wrote a total of three books on her career. Her first book was Married to a Rock Star which was published on the 1st May of 2003. After that, she published another book 4 Minutes a Day, Rock 'n Roll Your Way to Happy: Be Happier, Healthier,... on 10 November 2015. Besides, her most recent book was published on 5th April of 2016 named Kill It & Grill It: A Guide to Preparing and Cooking Wild Game and Fish with her husband Ted Nugent.

As of 2019, Nugent is working as a c0-producer and co-host of an award-winning television show named Ted Nugent Spirit of the Wild. What's more, the show revolves around Ted Nugent who searches for games at various ranches around many states of America. Besides, she appeared on many national shows of channels like Vh1, MTV, Discovery, CMT, FOX, and C-Span.

Nugent's husband is a well-known American singer and musician who holds a net worth of $20 million. The pair owns a couple of houses together in many parts of the United States including their House in Waco, Texas.

The house is a big mansion that is estimated to have over 3 bedrooms, 4 bathrooms, one living room, and many more additional rooms. Besides, while look at the picture of the house it is clearly seen that the house has a swimming pool just in front of the house. Additionally, the average price of a house in Waco Texas is $283,499.

Shemane Nugent is married to the famous American singer-songwriter, guitarist and political activist, Ted Nugent. The duo shared the wedding vows on January 21, 1989, in presence of their close of friends and family.

Shemane and Ted are blessed parents of their only child who is a son named Rocco Winchester Nugent.