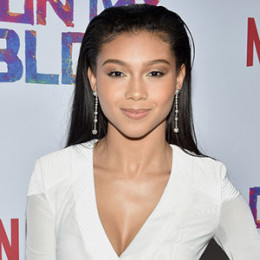 Sierra Carpi one of the rising Hollywood actresses succeeds to win million hearts since her debut in Hidden Figures in 2016. She is also recognized for her role in the Netflix series 'On My Block'.

Sierra Capri's Personal Life; Who is she dating?

Sierra Capri is possibly single but she has been breaking headline for sharing cute moments with On My Block star Diego Tinoco. The actress portrays the role of Monse, love interest of Cesar in season 3 of OMB.

Sierra Carpi at the premiere of Netflix comedy series On My Block.
SOURCE: footwear news

Previously, the Netflix actress rumored to be dating her fellow co-star Diego Tinoco after they spotted together at the orange carpet on the 2018 Nickelodeon Kid's Choice Awards. The duo, however, claimed to be a good friend and called their linkup rumors baseless.

In My Block actors, Sierra Capri and Diego Tinoco.

As the Baltimore, Maryland born actress changed her display picture on Instagram standing alongside Tinoco it let her fans doubt her relationship status. This alleged couple often shares their snap leaning on one another's shoulder.

The 20 years old actress is not spotted with any men on PDA or socials except for her co-stars. Sierra is close to her colleagues including Brett Grey and Jessica Maria Garcia. She seems workaholic and focused on her career as she is free from dating controversies.

The actress is quite open up about her personal life to fans and didn't hesitate to shares her daily updates with them especially through social sites. She garnered 687k+ followers on Instagram and 52.4k on Twitter.

Capri is an action movie fan and admires Will Smith the most. She can speak in English and Spanish language. Moreover, she has a tattoo on the back of her neck which is written in the Chinese alphabet.

Sierra Capri holds an estimated net worth of $600,000 and all thanks to her acting career. The actress is currently working in the Netflix series, On My Block where she is believed to have a salary of $8,000 to $11,000 per episode.

Carpi debuted in movies with Oscar-nominated drama film Hidden Figures in 2016. She shared the screen with famous Hollywood actors like Taraji P. Henson, Janelle Monae, Jim Parsons, and Kristen Dunst. In addition, the film hit the box office with a collection of $236 million against the budget of $25 million.

The On My Block star earns an estimated amount of $2,055.75-$3,426.25 per Instagram post. Besides that, she also collected a good sum of fortune from brand endorsement and deals.

Sierra Carpi was born on 8 September 1998 in Baltimore, Maryland in the United States with Virgo zodiac sign. She is from American-African ethnicity and holds American nationality. She was just 12 when her parents divorced, afterward, she and her three brothers were raised by her mother, Felicia Guyton.

Carpi studied her elementary education at the Hillcrest Elementry School in Catonsville, Maryland. Then, she moved to Georgia with her mom and started studying at Armstrong State University in Savannah, Georgia where she majored in the course of Biology for her junior years.

The 5 feet 6 inches actress was a sharp learning kid from her childhood and she always dreamed to become an actress. Now, she has moved to Los Angeles, California to further extend her acting career. Eventually, she found the opportunity to star in the Netflix series, On My Block which opens the door for her acting career.

Take A Look At The Interview of Sierra Carpi on the Premiere of 'On My Block'!