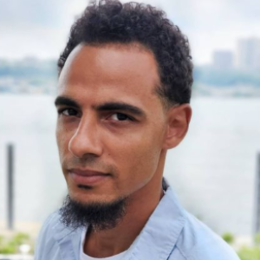 Silvestre Rasuk is an American actor best known for his appearance in Rob the Mob, Law & Order Criminal Intent, and Law & Order: SVU. He stepped into the entertainment field in 2000.

Does Silvestre Rasuk Have a Girlfriend? Who is He Dating?

Toe to Toe cast Silvestre Rasuk has never been married before. But he has allegedly been dating makeup artist Lorissa Es Arte since November 2021. Lorisse runs a merch, "Ultrabeauty," about personal care, beauty, and cosmetics. 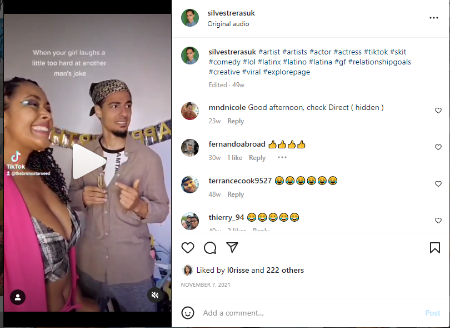 On November 7, 2021, Silvestre uploaded a TikTok video of himself with Lorisse along with hashtags girlfriend and relationship goals. It is not learned whether the two are still together, and it's been a long time since Rasuk posted a photo or a video together with his lover. However, their collaboration TikTok videos are still on the actor's Instagram, so we can assume that they are still together despite not being pictured together for a year now.

The Rock Steady actor's brother Victor Rasuk seems much more forward than him. His sibling Victor is also an actor and has dated multiple women from the Hollywood industry.

The Stalker star dated Melonie Diaz in 2003, but the relationship did not last long. Followed by a breakup with his first girlfriend, the actor hooked up with Nikki Reed in 2004.

In 2005, the Fifty Shades Darker cast was romantically linked to Bridgetta Tomarchio. However, the duo sadly ended up a year later. Unlike previous, Rasuk's affair with Nikki was short-lived. The pair went separate ways in 2006.

Rasuk started his professional career making his debut in the 2000 film Ernesto. In 2002, he received an offer to portray Nino Vargas in Raising Victor Vargas, aka Long Way Home, through which he made his career breakthrough. In the same year, Silvestre also landed the role of Little Stevie in the film Rock Steady.

In 2003, he was featured as Raul in Spoonful of Sugar. The following year, Silvestre starred in an episode of The Jury and then in Men Without Jobs. In 2008, the Harlem, New York-born actor made his debut in the tv series New Amsterdam as a kid.

Four years later, the actor performed as Rashid in the 2009 film "Toe to Toe." In 2010, the curly haired served as a band member and a volunteer in the tv series Law & Order: Special Victims Unit and Law & Order: Criminal Intent. Rasuk 's other notable acting credits include The Big C, American Hollywood, Rob the Mob, and Our Idiot Brother.

Silvestre Rasuk was born on September 5, 1987, in Harlem, New York, United States. His parents are Dominican by nationality who moved to the U.S before their children's birth. Rasuk has not discussed his educational experience in detail. Nevertheless, he probably attended the local Performing Arts School in the U.S.

The Raising Victor actor's brother Victor is three years older than him. The siblings grew up in an artistic family background which led him to pursue a similar field in the future. Rasuk's mother is the one who enrolled the brother in the Third Street Music School. He gives credit to his mom for supporting him and his sibling in acting at a young age.

As for his physical appearance, Rasuk is five feet 11 inches tall and weighs 60 kg. He has curly brown hair and blue eyes.

As mentioned earlier, Silvestre Rasuk's brother is Victor Rasuk. The Rausk brothers even shared the screen in the 2002 movie Raising Victor Vargas.

The 35-year-old's brother Victor is an even more successful actor than him and has many television and movie credits earning millions from it. The Baker and the Beauty star possesses an impressive net worth of $2 million as of 2022. He even owns a lavish apartment in Los Angeles.

Rasuk has starred in films like Flawless, Five Feet High, and Rising in 2000. Later, he appeared in the movies Lords of Dogtown, I'm Reed Fish, Che: Part One, and Jobs, Godzilla, and Being Flynn.

From 2010 to 2011, Rasuk appeared as Cameron Calderon in How to Make t in America. In addition, he was scheduled to portray Jose Rodriguez in Fifty Shades of Grey. Surprisingly, Victor had even garnered three Imagen Awards, a Teen Choice Award, and an Independent Spirit Award.

Silvestre Rasuk prefers staying in touch with fans and followers via social media. He has 1153 followers on Instagram under "silvestrerasuk." Rasuk's Instagram bio suggests he is a spiritual artist, transmitter, and mystical healer.

Mr. Rasuk is not available on Twitter but has 107k followers on Facebook. In the Facebook intro, Silvestre mentioned himself as an actor, artist, and NYC bicyclist.

Some Interesting Facts About Silvestre Rasuk