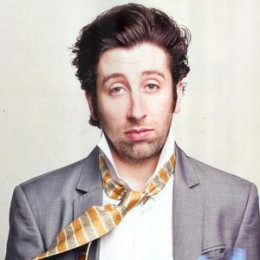 Synopsis American television actor Simon Helberg is best known for portraying the role of Howard Wolowitz on the CBS hit comedy The Big Bang Theory. He also appeared in the 2016 film Florence Foster Jenkins and the 2004 film A Cinderella Story. Further to add, Simon kicked off his acting career as one of the comedy duo, Simon, and Derek.

Simon Helberg was born on December 9, 1980, in Los Angeles, United States of America to Sandy Helberg and Harriet B. Helberg. His mother Harriet is the casting director and his father Sandy is a German-born actor. He was brought up in Judaism with his brother Mason Helberg.

Simon Helberg belongs to American nationality, and he is of mixed ethnical descent. He attended the Crossroads School in Santa Monica, California. During which, he became friend with American actor Jason Ritter. After that, they shared a room together.

After completing his high school education, Simon moved to New York and joined Tisch School of the Arts. During this time, he trained at the Atlantic Theatre Company.

Simon Helberg first started his acting career along with comedian Derek Waters as the sketch comedy duo Derek & Simon in the early 2000s. After making an unusual appearance in many films, he starred in a 2014 romantic comedy film; We’ll Never Have Paris alongside Melanie Lynskey, Maggie Grace, Zachary Quinto, Jason Ritter and Judith Light as well.

The star of The Big Bang Theory Simon Helberg is a married man. He is married to his longtime girlfriend American actress and director Jocelyn Towne. The couple got married on July 15, 2007.

Simon Helberg’s wife Towne gave birth to their first baby girl Adeline on May 8, 2012. After two years, the couple again became the parent to their second child Wilder Towne Helberg on April 23, 2014. The couple is now living happily with their two kids.

Moreover, they don't have rumors of divorce or separation in front of the media since their marriage. The couple loves sharing quality time with each other.

As a famous Hollywood actor, Simon Helberg has earned a mouthwatering amount of net worth. His present net worth is $45 million, which he has accumulated from his acting career.

Jocelyn Towne is an American actress and director. Towne has appeared in a number of minor roles in film and television, including Havoc in 2005 and Gilmore Girls in 2007.