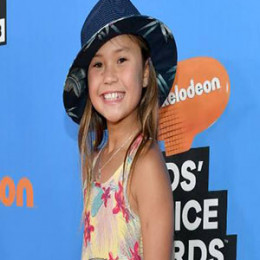 Japanese youngster Sky Brown is popular as the youngest kid who has ever participated in the Vans US Open skateboarding championship. The 10-years-old skateboarder is also the winner of the 2018 American television show 'Dancing with the Stars: Junior'. She caught the limelight after becoming Nike's youngest signing.

Sky Brown is a famous skateboarder from Japan. The 10-year-old skater is busy participating in and winning many competitions. Besides, she is currently doing her pre-school studies.

Sky is a multitalented kid and lives with her British dad and Japenese mom in Miyazaki Japan; however, she is spending much time in the U.S as of now. The young star loves to travel and go on adventures, skateboarding being her greatest hobby.

Likewise, she also enjoys surfing and dancing, and not to forget, she has a big heart as the young sensation also helps people who are in need.

Brown is also a music fan and listens to the singers like Nicki Minaj and Sia while preparing for competitions. She supports female athletes and wants them to compete in sports and make name for themselves.

Sky Brown became the youngest skateboarder ever to participate at pro series of the Vans US Open in 2016. As a matter of fact, she ended up ranking better than women 20 years older than her. Following that, she competed at Simple Session which is a senior women's competition in Tallinn, Estonia and grabbed a gold.

Brown was not satisfied with herself for just skating and surfing, therefore, she took part in the US version of 'Dancing with the Stars: Junior' in December of 2018. She participated along with her dancing partner J.T Church and won even the competition.

Sky Brown, the 11-year-old athlete is smashing the skateboarding world and defeating adults much older than her. Despite being so young, she's set for her sights on participating in the Tokyo Olympics in 2020 where she would be Britain's youngest ever summer Olympian. Notably, it will be the first time skateboarding will be an official sports at the Olympics.

In an interview with BBC Brown says, "I want to go to the Olympics because I feel like when they see me thus little girl doing this crazy trick that probably boys aren't even doing they'll be like, maybe I can do that too".

Back then, she went to Brazil for a competition which gives points for the Olympics, the biggest competition they did ever. There she did frontside 540 where she spin one and a half times.

Sky Brown is a young skateboarder who participated in many competitions like Vans US Open and Dancing with the stars: Junior. She reportedly earns $51,000 as her average salary which of course varies upon the type of competition. As you know the level of success she has had, it might not be difficult for you to believe that she has an estimated net worth of $150 thousand.

Sky Brown at the Pro Vert Skaters Contest, preparing for her final Performance.

Just like Brown, Rodney Mullen is a professional skateboarder who is famous for his freestyle and street skateboarding skills. Moreover, he holds an estimated whopping net worth of $30 million.

Sky Brown doing what she loves the most-Skating.

The Dancing with the Stars: Junior-winner already attracted many brands through her challenge. At first, she fell in the eyes of the famous sports brand Nike and she even signed for projects of the brand. Likewise, she also partnered with skate brand Tech Deck.

Sky works with a charity partner and she has designed a skateboard from which the profits of the sales go to fund skate schools for underprivileged kids from different countries. As of now, the charity raised over $17,000.

Sky Brown was born on 12 July 2008 in Miyazaki, Japan with the birth sign of Cancer. Hence, she is 10 years old as of 2019. She belongs to Japanese nationality and mixed ethnicity as her father is British and mother is Japanese. The young skateboarder grew up along with her brother Ocean Brown who is also crazy about skateboarding.

Initially, she started skating after watching her father skate when she was 4. Moreover, she started surfing in her free time since 2012 and is often spotted surfing on the coasts of Japan.

The brown-eyed skater wants to become an Olympic champion and she is working hard to achieve her goal in the upcoming 2020 Olympic games. Moreover, she also wishes to feature in the 'X Games'.

The famous youngster, Brown is an active person on social media including Instagram where she has garnered over 345k+ fan following and she often updates her daily activities.

Check out the video of Sky Brown explaining about her Olympics Dreams!