Skylynn Elizabeth Floyd is an internet sensation, she rose to fame after her vine stars half-brothers, Nash and Hayes Grier’s introduced her as their sister in family lifestyle channel in 2014. She is just 9 years old but she has a million followers on Instagram. She joined YouTube in 2013 and started her self-titled channel, Skylynn Floyd which is managed by her parents and has more than 320k followers.

Skylynn Elizabeth Floyd was born on June 12, 2009, in North Carolina to Elizabeth Floyd and Johnnie Floyd. She has three half-brothers; Will Grier, Nash Grier, and Hayes Grier. Will is a quarterback for the University of Florida while Nash and Hayes are popular vine star who played a major role in Floyd popularity.

Floyd featured in her brother, Nash video called "Meet My Sister" in 2014 as a part of his family member. Since then, she garnered massive popularity among audiences and often featured in her brother's vine videos. By the age of 5, Elizabeth Floyd has accumulated over 1 million followers on Vine. She is immensely popular in Instagram as well where she has 1.1million+ followers.

In 2013, Floyd joined YouTube and started her own self-titled channel, Skylynn Floyd which is managed by her parents. As of 2018, her channel has more than 320k subscribers. She often posts video related to her daily activities, school programs and travels with her family. She also made videos collaborating with celebrities like Mahogany Lox, Tez, and Emmerson Cauthren.

Skylynn Elizabeth Floyd is one of the fewest internet celebrities who gain immense popularity in short span of their career. She is just 9 years old but her fan following is in millions. By the age of 5, she has her own self-titled YouTube channel, Skylynn Floyd which has over 302k. She made $219 - $3.5K per month from her channel and $2.6K - $42K per year.

Currently, Skylynn Elizabeth Floyd is focusing on her studies and YouTube videos. She shares a special bonding with her brothers. 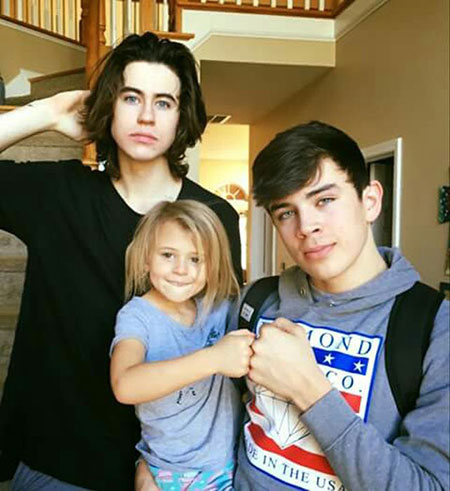 Floyd loves horseriding and she often posts her horseriding pictures on Instagram. She also enjoys baking and dancing. Her favorite movie is Disney's Tangled and favorite TV show, Fixer Upper. She lives with her family in North Caroline.

Check out the video of Skylynn Elizabeth Floyd where her brother introduced her to his fans,