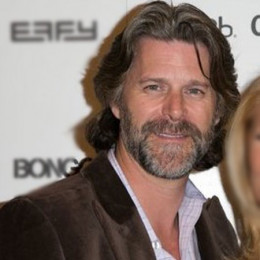 Slade Smiley is an American TV personality whose fame rose to prominence with an appearance on the Bravo TVs The Real Housewives of Orange County show. He is a successful and well-established businessman as well as a TV entertainer.

Slade Smiley, a twice married and divorced man, is currently engaged to Orange County star Gretchen Rossi since 2013. They were in a relationship from 2009. Slade and Gretchen are together for ten years now but, the duo hasn't still decided to walk down the aisle. Is the reason behind not marrying is the debt?

In case, Smiley and Gretchen tie a knot, this would be their second marriage for both the actors. Smiley is a father to two children, Gavin Smiley from his first wife Rosie Smiley and Grayson Smiley from second wife, Michelle. Slade and fiancee Gretchen Rossi welcomed a daughter, Skylar Gray SMiley on July 10, 2019.

On 21 November 2019, Jo de La Rosa said her ex- Slade gave her a fake canary diamond engagement ring. She also admits their relationship wasn't either build to last. The RHOC alum and Smiley's split was documented on Season 2 of the Bravo series, which aired in 2007. Smiley and Rosa lived in an engaged relationship for a year.

How Much Is Slade Smiley's Net worth?

Being involved in the entertainment sector and business field Slade makes a lucrative amount. He has an estimated net worth of $500 thousand in January 2020 and living lavishly with his present fiancé. He receives a salary of $35-$60 thousand per episode for starring in reality shows.

Slade Smiley spares his time in involving at a number of charities including Make A Wish Beckerstrand Cancer Foundation as well as the Desert AIDS Project. In the early, the reality star launched "Radio Slade" a weekday,  afternoon drive time, music and pop culture-oriented radio program on Southern California Playlist 92.7 FM.

Slade was served with legal papers for her alleged unpaid credit card bill in October 2018 by a debt collector. The suit claimed that Gretchen Rossi was issued a Citibank/Home bank Depot Credit card in 2014.

RHOC housewife reportedly made payments until January 2017 but then refused to pay on the unpaid balance of $9,433.56. The suit asked him $9000 in damages from Rossi.

Slade began his career as a model and advertiser of different brands. In the advertisement field, he represented popular brands such as Adidas, Gillette, Volkswagen, and Gatorade & Milk.

He along with his wife Rossi has featured on several TV programs such as E! News, Extra and Access Hollywood, Oprah and Dr. Oz followed by publications like People, Us Weekly, Life & Style, Ok and many others.

In 2005 Slade made an appearance on the popular series of Bravo TV entitled The Real Housewives of Orange County (RHOC). He also played in spin-off series Date My Ex in 2008.

Other than that, Smiley is also the CEO of a company Grayson Entertainment which he named after his younger son. The company specializes in marketing, consulting, brand development and sponsor integration.

Slade Smiley was born on October 29, 1973, in Oakland, California while raised in Anchorage, Alaska. He had a keen interest in music and dramas from an early age.

Slade joined a local performing choir at age of 13 and inspired through arts by performing in musical productions and drama classes in high school and college.

During high school, Slade frequently performed in musical events and dramas with a keen interest in art. Smiley earned a degree in international business from California State University, Long Beach.

In his early days, Smiley developed an interest in athletic fields like skiing, track and field, and cycling. He showed his active participation in the Olympic Training Center with the cycling team and 2003 Tour De France.

Rosie Smiley is the first wife of Tv personality Slade Smiley. They have a son together namely Gavin Smiley.

Michelle Arroyo is the second wife of Slade Smiley. They were blessed with a son Greyson Smiley who was in 2000.Greyson suffered from cancer.

Gavin Smiley is the first son of Slade Smiley from his first wife Rosie Smiley.

Greyson Smiley is the second son of Slade Smiley with his second wife Michelle Arroyo.