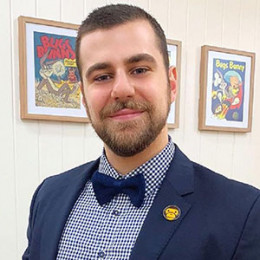 In the modern world, there are lots of social media platforms which gives the perfect opportunity to grab both name and fame. Many people catch those opportunities and rise to stardom and earn a good sum. Among all those personas, Slaiman is a famous YouTuber who is popular for making prank videos on YouTube. He owns three YouTube channels where he garnered millions of views.

What is the Relationship Status of Slaiman? Who is he Dating? Know About His Personal Life

Slaiman is currently dating a famous Instagram star, Kate Martineau. The duo is open about their relationship and loves to share the screen together on YouTube. Moreover, it's pretty clear that the couple shares a healthy bond and is often spotted together in many events.

The couple has been dating from a couple of years and no doubt, they have miles to go together. The lovebirds are deeply in love and there will be no wonder if they share the wedding vows soon.

Slaiman and Martineau recently celebrated the anniversary of their romance but for how long they have been together, it's still a mystery.

Here take a look at their picture which Slaiman shared on his Instagram:

The Youtube star is out of rumors and controversies regarding his previous dating life and lives a wealthy life with his girlfriend. It was on 12th February when he celebrated 'Happy Birthday' of his lovely soulmate.

He is career oriented and shares many prank videos with her girlfriend which are mostly based on entertainment purpose. The YouTuber loves to go on vacations with his partner and of course make the vlogs of their traveling.

Are Slaiman and Kate Martineau still Together?

Slaiman, the 27-year-old YouTube star is still in a lovey-dovey relationship with his beloved spouse-to-be, Kate Martineau. On April 5, 2020, the Australian content creator did a "Going Missing Prank" on girlfriend, Kate for one hour watching her inside bedroom.

Since the duo were stuck in a quarantine at home not going out anywhere it would be the perfect time on her because Kate obviously knows he's not leaving the house or going out anywhere. So, if Slaiman goes missing it's hopefully going to work better than if they were just living normally.

Before Slaiman vanish in the thin air, he old Kate that he's taking the trash out and just not going to come back literally for hours. He leaves all his keys and wallet there so it looks he didn't pop out anywhere and hopefully. As Slaiman thought, the prank literally worked on her and made her cry.

What is the Net Worth of the Famous Internet Sensation Slaiman?

Slaiman holds an estimated net worth of $300,000 and it's all because of his involvement on social media. The YouTuber holds three different YouTube accounts from where he is believed to earn a salary of $30,000 per month.

Woo! We just hit 2 million subscribers YOU GUYS ROCK! Thank you for your support and for being so awesome

Here's an interview session of Slaiman with his girlfriend while attending the VIDCON AUSTRALIA 2017:

Next, he opened his second YouTube account as Music by Slaiman on Sep 7th, 2015 where he uploads many videos of his music. Moreover, on January 22, 2017, he mutually opened his third channel with his girlfriend Kate naming Slaiman and Kate where they upload their prank videos and relationship topic videos.

Slaiman and his sweetheart, Kate Martineau runs an online clothing line, a merchandise "Teespring" which produces a custom made regular fit/ unisex Tees (T-shirts) and printed cushions. The price varies from $19.00 USD in different colors. The shipping costs begin at $12.50 for the first apparel and $4.00 for each additional apparel item.

Slaiman was born on 14 March 1993 in Australia with Pisces zodiac sign. Furthermore, the 26-year-old YouTuber was raised along with his two younger sisters in Australia.

He seemed so happy graduating in a Law degree and Pharmacy in December 2018 in the post below!

After his graduation, he started working as a pharmacist and took his YouTube career side by side.