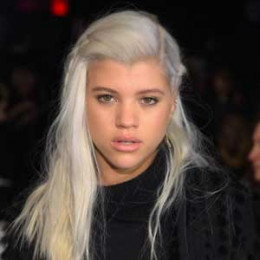 An American fashion model, Sofia Richie is engaged with several brands including- Adidas, Tommy Hilfiger, Channel, Madonna's Material Girl line, Chanel, Dolce & Gabbana, DL 1961 and so on. She is also known as the daughter of the famous singer, Lionel Richie. Sofia was also featured in Teen Voyage and was also signed with Select Model Management, a London-based modeling agency. The beautiful, Sofia was also seen on the cover of Complex and Billboard magazine's style issue.

Sofia was born to parents Lionel Richie (a singer and songwriter) and Diane Alexander on 24th August 1998 in Los Angeles, California. Richie built her interest in music influenced by her father. Right from the early age of 5, she started learning singing and learned piano at the age of 7.

After that, she took vocal classes from Beyonce's vocal coach. She attended Oaks Christian School where she got the nickname Celebrity High.

Sofia Richie started her modeling career right from the age of 14 with Teen Vouge, the US magazine with Elaine Welteroth as an editor. After one year, she got her first contract from Mary Grace Swim, a Los-Angeles based swimwear company and also signed a contract with the London- based modeling agency, Select Model Management. Moreover, she became the face of Material Girl clothing online in 2015 which was announced by Madonna.

Richie was in relation with Jake Andrews, an American guitarist, singer plus songwriter. They were caught together many times in various places. However, their romance only lasted for a while, and they parted ways.

Furthermore, in 2016 Sofia was in an affair with a Canadian singer sensation, Justin Bieber. The couple was also caught making out with each other and were in live-in relation as well. Unfortunately, the pair separated. Currently, she is single and enjoying her single life.

The sexy, Richie has an estimated net worth of $ 3 million. She worked in various advertisements campaign for numerous brands including- Madonna's Material Girl line, Chanel, Dolce & Gabbana, DL 1961, Adidas and Tommy Hilfiger. Moreover, she also did several photo shoots for Elle and Vanity Fair and has currently featured on the cover of Billboard magazine's style issue and Complex. Sofia owns a Range Rover.