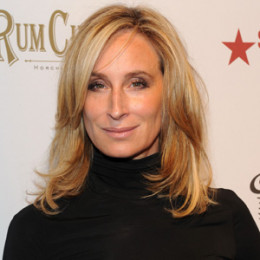 Sonja Morgan, 53, is a reality television star most known for her appearance in the reality television series, Real Housewives of New York. Further, she is known for her movies, The Marsh starring Oscar winner Forest Whitaker of The Last King of Scotland and Gabrielle Anwar of Burn Notice and The Tudors. Besides, Sonja is single as of now after she divorced ex-husband, John Adams Morgan.

Sonja Morgan was born on November 25, 1963, in New York, USA. As far as her ethnicity is concerned, she is White American and holds American nationality.

Morgan studied fashion at The Fashion Institute of Technology.

The promising reality star began her career as a waitress in Madison Avenue. She was known for setting affordable luxurious with her collections like swimwear and sportswear. She has been working in the fashion industry her entire life.

After pursuing fashion retailing on an Upper West Side, she became a restaurant/hotel and luxury brand consultant for top establishments across the country.

Later on, Morgan expanded her business expertise into the entertainment industry and produced several movies including The Marsh. She then featured in the Real Housewives of the New York City.

This is how a princess introduces a #Queen. @bhytes I’m coming to your hometown #Toronto NEXT Saturday. Come up from #Nashville. I miss you. It won’t be a #Drag We are having a #boozybrunch @thisisthyrst Swipe for more fun w B & event details [email protected] @rupaulsdragrace

Additionally, she has made memorable appearances on the shows including Million Dollar Listening NY, Rachel Ray’s 30-minute meals, The Millionaire Matchmaker and Watch What Happens L!ve. She was featured several times in the gold standard The New York Sunday Styles by Bill Cunningham. She has magnified the cover of numerous Luxury Lifestyle including K9 Magazine, Original Magazine, Social Life Magazine, and 25A.

Apart from that, she is also a movie producer. Her movies entitled The Marsh starring Oscar winner Forest Whitaker of The Last King of Scotland and Gabrielle Anwar of Burn Notice.

In January 2015 she launched her CBS Play.it podcast Sonja The City where she talks about culture and fashions.

The popular reality star is living a luxurious life with her daughter, Quincy as she has a fantastic net worth of $15 million.

Morgan was married to John Adams Morgan. The couple first met at an Italian restaurant in San Petro. They were together for a light dinner. After dating for several years, the pair married in 1998.

The former husband and wife have a daughter named Quincy Adams Morgan. After being together for some years, the couple divorced.

There was a rumor that Morgan demanded $3 million from her ex-husband, John Adam as spousal support. As of now, Sonja is neither dating nor married to anyone.

The popular reality star married John Adams Morgan in 1998. They first met in a restaurant and started dating after that.

Sonja Morgan and John Adams were married in 1998. They were blessed with a daughter named Quincy Adams Morgan.