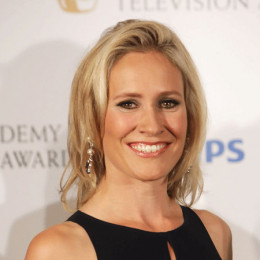 A British newsreader and journalist who is widely famous as the host of BBC News at One. She was born to florist mother and a businessman father. She has earned a degree in broadcasting and journalism from City University London. In 1992 she started her career in journalism by joining BBC as news reporter. In 1997 she moved to National television where she co-presented the BBC's Breakfast News program on BBC One. She has also guest-hosted BBC News at Six and BBC News at Ten. City University London awarded her with Doctor of Arts honoris causa in 2013. Beside news reporting show she has also mad cameo appearance at the beginning of the film named A Good Day to Die Hard.

Sophie Raworth was born Sophie Jane Raworth on May 15 in Redhill, Surrey, England. Her father is a businessman and mother worked as florists. He grew up in an exclusive area of Twickenham in south-west London.

Raworth attends the independent Putney High and later joined St Paul's Girls from where she completed her schooling. She completed her degree in French and German at the University of Manchester.

She also teaches English to teenagers in Toulouse before studying for a postgraduate course in broadcasting and journalism at City University, London.

In 1992, Raworth started working on the BBC as a news reporter. In May 1995, she presented BBC's Look North programme in Leeds.

Later, she worked as a co-presenter on the BBC's Breakfast News programme BBC One with Justin Webb and later with John Nicolson.

In 2018, she presented a documentary called RAF 100: Into the Blue celebrating the 100th anniversary of the Royal Air Force.

Exploring her personal life, she tied the knot with her longtime boyfriend who is a real estate agent Richard Winter. Together the couple is blessed with three children Ella Rose Winter, Georgia Winter, and Oliver Winter.

She has led a very happy marriage and family life. Since she is having a very healthy relationship with her husband, there is no rumor or speculation that she might get a divorce in near future. There is no information on her past love affairs, dating, or boyfriends.

They were an old friends prior to getting married. After he proposed to her on the Amalfi Coast, they got married. Together they are parents of three children.

She is the eldest child of the family. Sophie was 35 years old when she gave birth to her.

She is very adorable child. The couple gave birth to a really beautiful child.

He is the only son beside two daughters. His picture along with his mother can be found in different sites.