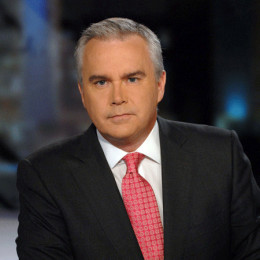 Huw Edwards is a Welsh journalist, presenter, and newsreader. He is the lead presenter for BBC News and has presented major breaking news in the United Kingdom. He currently presents Britain’s most watched news program, BBC News at Ten. He has won several BAFTA awards in his career.

Back in December 2018, he revealed that he has an LGBT fanbase. Besides, he achieved an amazing three stone weight loss after taking up boxing. He is currently in his right weight best for Strictly Come Dancing.

Edwards was born on August 18, 1961, in Bridgend, Glamorgan, Wales. British by nationality, he belongs to the White ethnicity. He was brought up in Llangennech, near Llanelli at the age of four.

Edwards is the son of Hywel Teifi Edwards and Aerona Protheroe. His father was an author and Research Professor of Welsh-language Literature at the University College in Swansea. His father was a Plaid Cymru and Welsh Language activist as well. His mother was a teacher and has taught at Llanelli’s Ysgol Gyfun y Strade for 30 years.

Edwards received his early education from Llanelli Boys’ Grammar School. He completed his graduation with a first-class honors degree in French from the University College. He began postgraduate work in Medieval French at Cardiff University after receiving his degree.

Edwards started his career as the news trainee at BBC in 1984. He presented the BBC Six O’clock News for four years. He was also the commentator on behalf of BBC on 2008 Beijing Olympics and 2012 London Olympics.

Edwards has done the coverage of the 2011 Royal Wedding, the Queen's Diamond Jubilee in 2012 and BBC UK General Election 2015 is some of the memorable coverage he has done till now.

Edwards, age 56, is married and has five children. He married Vicky Flind, a BBC producer. His wife is also working in the journalism field. She is an editor for This Week as well. The couple is taken as a very iconic couple.

Edwards has not involved himself in any extramarital affairs till the date. Their married life is going very smoothly with the good mutual understanding and support. He currently resides in Dulwich, London with his wife and children.

He is enjoying his newfound status as a sex symbol. Earlier, he reported that he is quite popular with the LGBT fans.

Huw Edwards' Net Worth and Salary

Edwards earns $722k - $788k yearly as a BBC presenter. His show, BBC News at Ten has attracted many viewers. He has won many BAFTA awards in his career.

He won several Best Onscreen Presenter awards for his representative works. Looking at his lifestyle and earning, his net worth is speculated to be in millions.

Professionally, she is a BBC producer. Together they are leading a very happy married life. She has given birth to five children.

He is the eldest son of the family. He is in his teens.

He is very handsome boy. He loves to play dart with his father.

He is very healthy kid. He resemble more like his father.

She is beautiful girl and she is in her early teens.