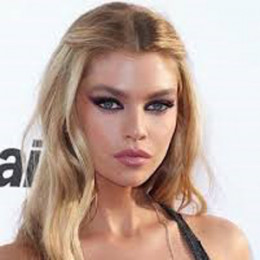 Stella Maxwell is a famous British fashion model who gained recognition after appearing in Victoria Secrets. Maxwell is a lesbian and is in a romantic relationship with the renowned actress Kristen Stewart. The duo seems to have a strong bond between each other.

Stella Maxwell was born Stella Maynes Maxwell on May 15, 1990. She is from Belgium and is of Irish descent. Her father is a diplomat. She is the youngest child and grew up along with her older siblings Patrick, Martin, and Helen.

Maxwell attended the European School in Woluwe and Queen Margaret College in Wellington. She graduated from the University of Otago.

In 2016 she was voted as no.1 in Maxim’s Hot 100 List and also featured on the cover of the Maxim magazine. During her career journey, she worked for Marc Jacobs and endorsed brands like Vogue.

The beautiful blonde Maxwell earns a decent amount as a model. As one of the Victoria's Secret Angel, she must most probably have a net worth in millions.