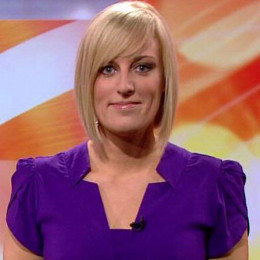 Stephanie Rose McGovern is a former business journalist for the program BBC Breakfast, BBC Network. She began her career with BBC network first working at Tomorrow’s World Program. From the University College London, she studied Science Communication and Policy. At the age of 19, she was awarded as the "Young Engineer of Britian" after saving Black & Decker £150,000 a year by improving production techniques used for the Leaf Hog product.

Stephanie Rose "Steph" McGovern was born on May 31, 1982, in North Tyneside but she was raised in Middlesborough, Teesside. Nationality wise she is British and her ethnicity is white. Steph is a well known British media person who currently worked for BBC.

Even McGovern was awarded, Young Engineer for Britain, for saving Black & Decker by 150,000 euro a year. Later she enrolled herself in University College London and completed her education in Science Communication and Policy.

She is a former champion Irish dancer and still often attends international competitions, where she helps to coach dancers.

Steph began her career at BBC by the program named Tomorrow's World Program and gained experience which provides her job offer as a researcher in current affairs.

She was the main producer for Radio 4 before becoming the lead producer of business on the BBC  One, Six and Ten O'Clock news bulletins.

In 2010, McGovern worked for BBC Radio 5 Live and later made her debut in BBC Breakfast along with Roger Johnson. In June 2016, she joined BBC Watchdog and also co-presented Can Britain Have a Pay Rise? for BBC Two along James O'Brien.

Steph Mcgovern is possibly single at the moment but previously she was linked up with Mike Bushell. However, the news turned out to fake one.

Steph is very secretive regarding her personal life and she didn't like to disclose her private stuff in media. She is a very good friend of Kay Murray who is a Teesside television presenter and also a supporter of Middlesbrough.

McGovern was rumored to be pregnant back in January 2018 as she dealt with dozens of misplaced congratulatory messages from viewers. Observing the funny side of the blunder, she said,

She even took Twitter to respond on the topic and clear out confusions. She wrote,

"For those who are congratulating me on my 'pregnancy'. I am not 'with child', I am 'with pot belly'.

As we all know, McGovern is one of the successful British media personality and her net worth is also quite impressive which was assumed to be in millions of dollars. She has an estimated net worth of about $2 million as of 2019.