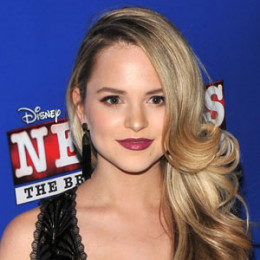 The 25-year old Stephanie Styles is an American actress, singer, and dancer based in New York City. Styles rose to fame playing Katherine in the national production of Newsies. Moreover, she has made appearances in stage productions of plays like Sweeney Todd, Our Town, and Spring Awakening.

The actress and singer Stephanie Styles was born on October 7, 1991, in Houston, Texas, the United States to a mother, Bridgy and she grew up along with her younger brother John Henry.

Stephanie had an immense love for acting since her very early age. She began her theater career when she was 6-year old at Theater Under the Stars. At the age of 12, she embarked on her first national tour and played the character of Louisa von Trapp in The Sound of Music.

After appearing in The Sound of Music, she featured in The Little Prince as The Rose and performed at New York City Opera.

Stephanie was cast as the character of Katherine Plumber in Disney's first North American Tour of Newsies in late May 2014. On October 5, 2015, Styles via Instagram announced that she was leaving the cast of Newsies, along with co-star Dan DeLuca.

She appeared as Princess Ann in Roman Holiday at the SNF-Golden Gate Theatre. Styles portrayed the role once performed by the Academy Award winner Audrey Hepburn in the classic film.

Stephanie Styles, 25, is not married but is currently dating CW series Riverdale star Casey Cott. She has often been cueing her fans and followers regarding her dating life through her Instagram post.

Stephanie posted a number of pictures with Casey on her Instagram but without specific captions. Well, the pair is possibly girlfriend-boyfriend but both of them have not clarified about their relationship.

Stephanie Styles is rising actress in Hollywood and has played in many theater productions including Bloody Bloody Andrew Jackson, Newsies, and Kingdom Come. Styles also garnered a good amount of net worth from her acting career that is estimated to be $1 million.