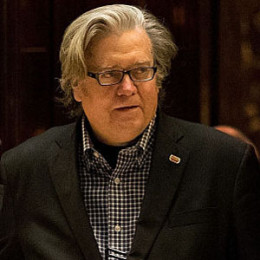 Formerly the executive chairman of 'Breitbart News, Steve Bannon is well known as CEO of Donald Trump's 2016 presidential campaign as well as the senior counselor to the 45th U.S. president. He worked as the political aide, and former media executive and film producer.Moreover, he attended the Principals Committee of the U.S. National Security Council from 28th January 2017 to 5th April 2017.

Stephen Kevin Bannon was born on 27th November 1953, in Norfolk, Virginia and raised nearby Richmond. Steve holds American nationality with white ethnicity. He is the son of Doris and Martin Bannon, a telephone lineman as the third of five children.

Bannon gained his master's degree in national security studies from Georgetown University School of Foreign Service. In 1985, he obtained Master in Business Administration with honors from Harvard Business School.

Bannon was an officer in the United States Navy for seven years in the late 1970s and early 1980s, serving on the destroyer USS Paul F. Foster as well as at the Pentagon. After military service, Bannon joined Goldman Sachs as an investment banker in the Mergers and Acquisitions Department.

Bannon was made the acting director of the Earth-science research project called 'Biosphere 2' in Oracle, Arizona in 1993, while still managing Bannon & Co.

He produced 18 films, from the 1991 Sean Penn drama named 'The Indian Runner' to Julie Taymor's 1999 film 'Titus.' He worked as the partner with entertainment industry executive Jeff Kwatinetz at 'The Firm, Inc.', a film and television management company.

Stephen also worked as an executive chair and co-founder of the 'Government Accountability Institute,' a tax-exempt 501 organization founded in 2012 until he left in August 2016.

Steve was the founding member of the board of Breitbart News.
He is the executive chairman and co-founder of the Government Accountability Institute, whose mission is to investigate and expose crony capitalism, misuse of taxpayer monies, and other governmental corruption or malfeasance.

On 17th August 2016, Steve was appointed as the chief executive of Donald Trump's presidential campaign. In February 2017, he appeared on the cover of  The Time, on which he was labeled "the Great Manipulator."

Steve Bannon was previously married to Cathleen Suzanne Houff. The couple has a daughter named Maureen Bannon born in 1988.

Bannon then tied the knot with Mary Louise Piccard, a former investment banker, in April 1995. After three days of their wedding, their twin daughters were born. In 996 Steve was charged with domestic violence as his wife had accused him of grabbing her neck and wrist during an argument about money. He then filed for divorce from Mary the next year.

After his divorce from his former wife, Mary Louise, he married Diane Clohessy and it ended in a divorce in 2009.

He has involved in many businesses including investment banking, filmmaking, and the media. As of now, he is estimated to have a net worth of about $10 million dollars.

Obama's chief strategist had a salary of $172,200 during his first term, so we can assume that Bannon will also earn something around that.

Steve Bannon was previously married to, Cathleen Suzanne Houff.The couple has one daughter. However their relation didn't last and separated.

He then was married to Diane Clohessy and they divorced in 2009. In 2006 the ex-couple moved in together into a $1.3 million apartment in Manhattan.

The couple has a daughter named Maureen Bannon born in 1988.

Their twin daughter was born three days after their wedding.

Their twin daughter was born three days after their wedding.