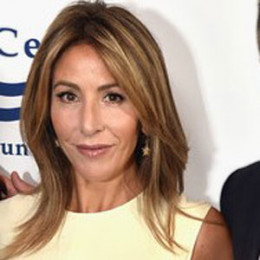 Suzy Shuster won an Emmy Award for her work as a sportscaster ABC Sports. She is the wife of renowned sports radio and television host Rich Eisen.

Suzy Shuster is a native of America. She attended Columbia University and earned her degree in History and Art History.

Suzy is a broadcaster and sportscaster working for ABC Sports. She began her career as an intern at 1994 Final Four broadcast on CBS. Later she became the host of the USC Football Pregame Show.

She often contributes to the news blog, The Huffington Post. She is the recipient of an Emmy Award and most recognized for her work Southern California Sports Report in 2000.

Shuster married anchor Rich Eisen. The duo first met at ESPN SportsCenter. They tied the knot on June 8, 2003.  The husband and wife are blessed with three children, two sons, Xander and Taylor and daughter Cooper.

Suzy earns a decent amount from her career as a broadcaster and sportscaster. She is someone who is wealthy on her own and more so with her husband Rich Eisen by her side. Her husband earns an awe struck amount with the yearly income of $1 million. He has accumulated an estimated net worth of $10 million.

Rich is a TV journalist for CBS Sports, NFL Network, and NBC Sports. He is also a host for both TV and radio for Direct TV, NFL Now, Sirius Radio and Fox Sports Radio.

Xander is the first child of Suzy Shuster with her husband Rich Eisen. He is the older son of the couple.

Taylor is the second child of Suzy Shuster with her husband Rich Eisen. He is the younger son of the couple.

Cooper is the youngest child of Suzy Shuster with her husband Rich Eisen. She is the only daughter of the couple.