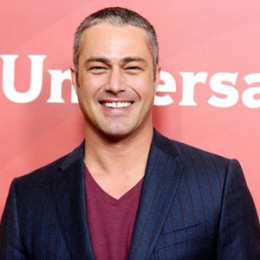 Taylor Kinney is an American actor most known for his character Mason Lockwood in The Vampire Diaries. He has successfully explored his acting skill performing in thrillers such as Zero Dark Thirty, Chicago Fire, and The Other Woman. He is also the ex-fiance of singer Lady Gaga and currently is in a relationship with the girl from South Philadelphia.

Taylor was born on July 15, 1981, in Lancaster, Pennsylvania, U.S. He is the son of Pamela Heisler, a dental hygienist and Daniel Kinney, a banker. After his parents divorced, he lived with his mother in Neffsville, Pennsylvania. He grew up along with his three siblings: Adam, Ryan, and Trent.

Kinney is an accomplished actor as well as a model. He began his career as a model. He then made his appearance in TV series such as Fashion House in 2006, What About Brian in 2007, Bones in 2008 and Trauma in 2009. His breakthrough role came as a Mason Lockwood in the supernatural drama The Vampire series.

Afterward, Taylor starred in Lady Gaga’s music video You and I in 2013. His talent got him the lead role on the show Chicago Fire in 2012. He featured alongside Jesse Spencer on Rescue Squad 3. He made his big-screen debut in 2012 in war drama Zero Dark Thirty. He also portrayed the character Craig on the hit series Shameless.

Kenney was once in a romantic relationship with the singer Lady Gaga. The duo started seeing each other in 2011 after their first meeting in Nebraska. At that time both of them were working on a music video You and I. The couple eventually got engaged in February 2015 but parted ways after 18 months in July 2016.

Taylor previously dated model Brittany Sackett for two years, starting from 2009 till 2011. The couple broke up as Kinney was frequently seen with Gaga.

As of now, he is caught up in the rumor of dating a 26-year-old, Alanna DiGiovanni from South Philadelphia. Alanna is currently a radiology employer at Thomas Jefferson University Hospital. Reportedly they attended the Formula One race and Taylor Swift concert together.

As an actor who played in thriller movies, Taylor earns a lucrative amount from his career. He holds the staggering net worth of $8 million. Till the date, he worked in the numbers of movies and TV series from where she makes a good net worth and salary.

Besides, Taylor bought a West Side Condo for $1.2 million. The house featured 3380 sq.ft.