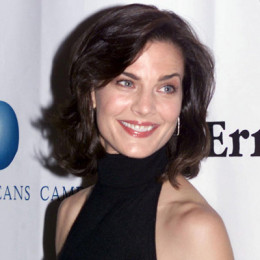 Theresa Lee Farrell is an American fashion model and actress who is generally known as Terry. She is known for her performances in the television series Becker as Regina Kostas and in Star Trek: Deep Space Nine as Jadzia Dax. She is the daughter of Edwin Francis Farrell, Jr and Kay Carol Christine. She was adopted by her stepfather David W. Grussendorf along with her sister. She dropped her high school at the age seventeen and became a model in New York.

She is a married woman. She is happily married and is true to him. She has left her world of interest for her family. She was so good at acting but after getting married to former Sprint Corporation spokesman Brian Baker (a.k.a. the Sprint Guy) then she decided to change herself and became a good mother by quitting her acting profession.

The couple has a son together named Max Baker. She loves doing yoga and sewing. She has never been to such a rumor which has let her stardom down.

After divorcing the first husband, she started dating Adam Nimoy in August 2017. The couple later tied the knot on 26 March 2018.

She is famous among her fans playing the role of Jadzia Dax in the TV series Star Trak: Deep Space Nine.

He is the current Sprint Corporation spokesman and is a lucky husband to have such a faithful wife.