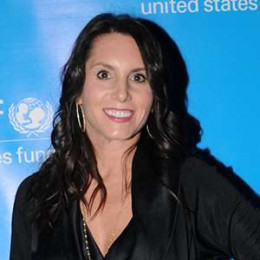 The New England Regional Board of Directors Tiffany Ortiz is involved with UNICEF, an organization that works to care for the world’s children. She grew up in Kaukauna, Wisconsin. The 44-years-old Tiffany belongs to white ethnicity and American nationality.

Tiffany Ortiz first met her future husband at a bar while Dave Ortiz was playing a ball at the age of twenty. Soon after, they both fell in love and began dating.

The beautiful woman Tiffany Ortiz married to a Dominican American retired professional baseball player, David Ortiz in 2003. Before marriage, the couple dated each other for several years.

Tiffany and David Ortiz married life ended after nearly 10-years of togetherness. They both filed for divorce in April 2013. But after a few months, the lovable couple reunite back together in June 2014 and have been happy than ever.

News surfaced in the media that David was shot in the back while at a bar on 9 June 2019. The incident occurred in the Dominican Republic and the MLB legend underwent major surgery following the shooting.

Later, he was transferred to Mass General Hospital in Boston on 10th June via ambulance. Sources say that David went through a successful 6 hours surgery and he's recovering.

Tiffany Ortiz has been involved in the charity which is done by the Red Sox wives, including the annual Red Sox Foundation charity fashion show.

Tiffany and the Red Sox have been charitable over the years, establishing The David Ortiz Children’s Fund in 2007, which is used to donate towards several organizations to assist children in need.

Jessica Ortiz was born on 23 October 1996. In 2015, she graduated from high school. She is the eldest children of David Oritz and Tiffany Ortiz.

The 16-years-old Alexandra Oritz is the second daughter of David Ortiz and Tiffany Ortiz. She was born on 22 March 2001. On 11 April 2016, she sang the national anthem before 2016 Boston Red Sox home opener.