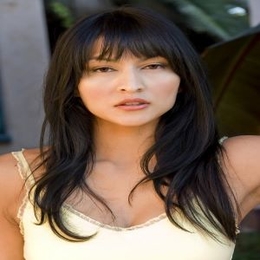 Canadian born actress Tinsel Korey is known for "Twilight films New Moon, Eclipse and  Breaking Dawn – Part 1". She is going to appear in movies like Avarice and Stained. Along with an actress, she is also a well-known singer-songwriter.

Who Is Tinsel Korey's Husband? Know About Her Wedding, Children

Tinsel Korey is happily married to her husband, Doug Yazzie. The couple walked down the aisle back on October 24th, 2008. Moreover, they are together for over a decade now, and henceforth are inseparable.

9 years. October 24th. Last year this time we were helping fight a pipeline together. And this year we threw a wedding for one of the siblings yesterday. This marriage stuff is no joke. It pushes you in ways you can’t imagine. But if you can weather the storms together, seeing the rainbow is that much sweeter. One lesson at time. Step by step. Up the next mountain we climb. #Team7

The wedding was held in an intimate ceremony between close friends, family, and relatives. Moreover, they share quite a bond with one another, and no news about their dispute or divorce has come till this date. What's more, they have been supporting one another in every step of their life.

Despite being together for many years, the duo is yet to welcome their own child. Though Tinsel doesn't have any child, she has a border collie named Lucky which she treats as its own child. Moreover, she and her husband are very fond of Lucky and often share its snap-in their social media.

Korey is quite a secretive person and prefers to share less information when it comes to her private life. Likewise, she is a very hardworking person and is currently focused on her career.

How Much Is The Net Worth Of Tinsel Korey?

Tinsel Korey holds the net worth around $500 thousand to $1 million all thanks to her career as an actress. In addition, the average salary of an actress in the United States is around $50,110. So considering her career graph, she earns more than that of any actress.

Korey further started her career by appearing on the FOX series Tru Calling. She then appeared in IntotheWest, The Lookout, Hybrid, Wyvern, Bullet and so on. However, she only came to limelight after starring as Makah Emily Young in Twilight. Similarly, she also starred in the television shows like Longmire, Z Nation, The Detour Season 3, Blackstone, Young, and the Restless and Rabbit Fall.

Some of her hit movies which helped her to collect much bucks are Twilight films New Moon, Eclipse and Breaking Down Part 1.

Prior to acting, Korey appeared in many advertisements.

Moreover, she also makes good money from her career as a singer. Tinsel performed as a singer at the 2008 National Aboriginal Achievement Awards. On addition, the average salary of a singer is around $45,000-$65,000 per year.

Stay tuned with marriedwiki.com for more celebrity biographies and news!!!

Tinsel Korey is happily married to her husband, Doug Yazzie. The couple walked down the aisle back on October 24th, 2008.