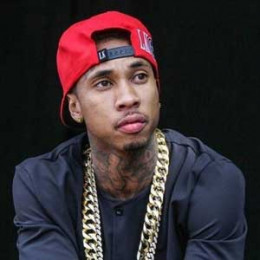 An American rapper, Tyga gained fame with the album- Careless World: Rise of the Last King which include Rack City and Faded featuring Young Money. His album, Hotel California was featured by the sensational, Wiz Khalifa, The Game, 2 Chainz and Lil Wayne.

Born as Michael Ray Stevenson on 19th November 1989 in Compton, California. He is the citizen of United States and is of Vietnamese and Jamaican descent.

He grew up in a low socioeconomic family, but in a leaked footage of the unaired TV show Bustas he claimed to be from a rich family and told his parent drove Range Rover. The video rose debate about his upbringing, and later he Tweeted about the video saying,"When u 14 an ambitious u don't give a fuk about anything. Scripted tv isn't that what we all live for.Hahahaha"

When Tyga was 11 years old, his parents moved from Compton to Gardena. He was really interested in rapping right from the early age. He used to participate in several competitions with his friends during his schooling and used to post it on the chat rooms.

Travis McCoy, a member of Gym Class Heros is the cousin of Tyga with whom he used to share all his interest in music. Later on, he got a chance to tour with Travis and his group. In 2008, Tyga released his first independent album named, No Introduction which was released on Decaydance Records.

His album grabbed the attention of millions of audiences at the same time they also received commercial attention and critics, one of his remix, Coconut Juice featured by Lil' Wayne.

Furthermore, he released another duet song with Justin Bieber titled, Wait a Minute which grabbed a weak online selling. In 2016 he signed a deal along with GOOD Music imprint under the aegis of Def Jam Recordings.

Tyga was robbed of a pair of diamond chains in 2008. He accused 40 Glocc, a local rapper as he showed the same piece in the online video but he turned out to be innocent.

Furthermore, two women from the video, Make It Nasty filed a case against Tyga claiming that he showed the women's nipples in the video without their consent and as a settlement, Tyga  paid $10 million each.

Tyga was in on off relationship with Blac Chyna, an American model plus entrepreneur. The couple firstly met in 2011 at Kings of Diamond in Miami at The F.A.M.E Tour After Party with Chris Brown. They did a music video named, Rack City and from then on the two started dating.

Officially from 9th November 2011 they were in relation and posed for the cover of Urban Ink magazine in 2012. On 16th October 2012, Blac gave birth to a baby boy named, King Cairo Stevenson without tying the knot. Tyga nad Blac both made a tattoo of their son's name. Latterly the couple got engaged in 2012 and broke up in 2014.

After months of separation, Tyga was again in relation with an American reality television personality plus mode, Kylie Jenner. The age difference between the couple became the major issue of gossip in the town.

They were often seen together and were in a living relationship and staying at Kylie house. After some years of dating, they parted ways. Currently, the rapper is single.

Tyga has an estimated net worth of $2 million. After the birth of his child, Tyga bought a mansion with 7 bedrooms, 8 bathrooms, a movie theater including pool, spa, waterfall, and gym worth $6.5 million.

Tyga also bought and gifted a Ferrari 482 Italia to his ex-girlfriend, Kylie on her 18th birthday worth $320,000 and also gifted a Maybach worth $200,000. He also invested $900,000 for an ultra-rate luxury automobile from West Coast Customs. He also prefers branded clothes and once spent $120,000 on his clothing from Last King.

On 16th October 2012, Tyga and Blac Chyna had a baby boy named, King Cairo Stevenson. The child was born before their engagement.