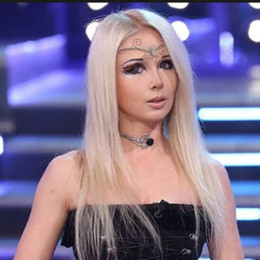 Although, beautifulness often lies in its natural form, adding some artificial features can make one look even better. Well, Valeria Lukyanova, better known as "Human Barbie" spent years of her career to look identical to a Barbie doll.

The fitness freak is also the winner of Miss Diamond Crown of the World. She is also known for her work in the movie The Doll.

Valeria Lukyanova's Personal Life; Who is her husband?

Valeria Lukyanova is married to her childhood friend turned husband Dmitry Shkrabov. Dmitry is a Ukrainian businessman who is fully supportive of his wife. The real life barbie tied a knot with the love of her life, Dmitry Shkrabov at age 16 in a hush-hush ceremony.

Lukynova's partner Dmitry is quite supportive of his wife and deeply in love with her regardless of all those negative comments. He likes her with or without a makeup. In an interview with The Sun, she once revealed some favorite things of her spouse.

She said, "Shkrabov became a strict vegetarian even earlier than I did. He is fond of mountains and conquered Mt. Elbrus. While in a previous phase of their relationship they traveled Everest, and the Himalayan mountain range of Nepal.

Nevertheless, the shocking fact about this pair is that they agree to be in an open relationship and do not want any children. They have been united as life partners for over a decade now. Yet the cupid relish one another's company with no signs of separation.

Valeria is involved in many controversies because of her appearance. Her doll-look-like-face is always a topic to debate for many media channels. She is often said to have many plastic surgeries, however, she never admitted to have one in her body except for her breast implants.

Earlier, she posted a rare 'make-up free' selfie of herself with an intention to encourage women to flourish their natural beauty.

"I truly don’t understand people who are ashamed to be without any makeup on. And there are quite a lot of people who can’t accept themselves this way. It is so shocking."

She is a fitness lover and claims to have that irresistible body all because of her gym workouts and particular diet. Moreover, she is living blissful life with her husband in Moscow, Russia, and the relationship between them seems fluid as there is no sign of divorce between them.

What is the Net Worth of Valeria Lukyanova?

Valeria Lukyanova is a Ukrainian model and entertainer whose net worth is $100,000 and it's all because of her modeling career. Moreover, her earning varies on the brand she endorses and the length of the campaign.

The adorable model participated in the 2007 worldwide beauty contest "Miss Diamond Crown of the World" and ended up winning it. The contest had no rules over any plastic surgery of the body modification and was attended by over 300 women around the world. Furthermore, in 2015 she participated in Dosso Dossi's fashion show as a model.

The beauty pageant winner also tried her hand in the acting industry. First, she was the subject of the Vice's My Life Offline documentary series called Space Barbie in 2013.

Later then, she also worked for the documentary movie The Phase in the same year and finally, she made debut in 2017 horror movie The Doll along with Mindy Robinson and Ron Jeremy.

Valeria worked with many modeling campaigns and travels all across the world for many projects. She has self-established her as an Instagram model and is currently busy working with various brands in Ukraine.

Valeria Lukyanova was born on 23 August 1985 in Tiraspol, Moldavian SSR, the Soviet Union holding Ukrainian nationality. Her mother, Irina Lukyanova worked for the military sector and her father Valery Lukyanov used to be a builder and also worked as a disc jockey as his part-time.

She studied at Odessa State Academy of Constructions and Architecture and grabbed her bachelor's degree in architecture.

Many of her fans and media personalities named her a 'Human Barbie'. The 33-year-old model hated that name saying it is insulting but kept that name as many of her fans wanted that title attached to her.

Lukyanova is a raw vegetarian and is strictly passing her days eating a liquid diet. In fact, in 2012 she said that her weight was 45kgs after training herself from a long period. Moreover, she is preparing herself to live off any light and air and is transforming herself into Breatharianism.

Back in 2014, the human Barbie reported the police saying she was punched and strangled by two men outside of her house. She was hospitalized after the incident and stayed there for over a week to take precautions.

Valeria Lukyanova is married to her childhood friend turned husband Dmitry Shkrabov. The duo shared the wedding vows in a private ceremony among their close friends and family.