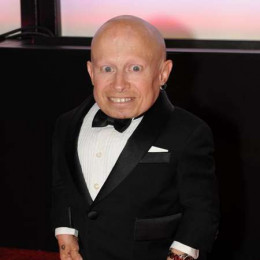 An American actor and comedian who is better known for his role as Mini-Me in the Austin Powers franchise. He is also famous for his height of 2 ft 8 inch. He was born with rare condition called cartilage-hair hypoplasia dwarfism. He is one of the shortest man in the world. he is son to Reuben Troyer, a repair technician and Susan, a factory worker. According to him, his parents never treated him any different than his normal siblings. Talking about his movies roles he has appeared in Men in Black and portrayed the Wee Waiter in Fear and Loathing in Las Vegas. He was also casted as Goblin in Harry Potter. In 2014 he appeared as 'The Boss' in the advertisement of the popular gambling site Bgo.com.

In 2008, he was all over the news after he and his former girlfriend's sex video was leaked. The video was shot in Beverly Hills, California and was leaked by Shrider and TMZ. Later he sued them for invasion of privacy. Talking about his personal life he has dated many girls despite of his dwarfism. He has dated different models. He was also married to former Playboy model but later he annulled the marriage. Currently he is relationship with his new girlfriend who is mother of a boy.

She is a former playboy model. He annulled the marriage denying their marriage and saying that she did it only to gain fame and attention.