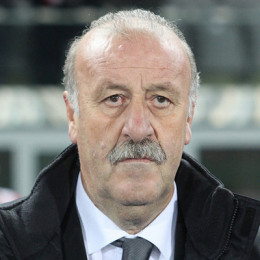 A popular Spanish coach Vicente del Bosque who is currently manager of Spanish National Team and who was also former professional football player. His father used to work as railway worker. He has a;ready been coach for the modest team like Real Madrid. Since he is the only coach to have won the Intercontinental Cup, Champions League, the European Championship, and the World Cup, he is considered as one of the greatest coaches of all time.

Vicente del Bosque's Personal Life: Who Is His Wife?

Regarding his marital status, he is married to his longtime sweetheart María de la Santísima Trinidad López.

Since there is no news of divorce, affair and extramarital affair from both of the sides we can say their married life is quite successful. It is said that he rarely smiles but in media he is considered as honest, gracious in both loss and victory, amiable and very friendly. Together they are the parents of three children including one daughter and two sons.

She is also known as Trini. She has given birth to three children and second child, named Alvaro, has Down Syndrome. Though there is not so much information regarding her children, their family photo can be found in different sites.