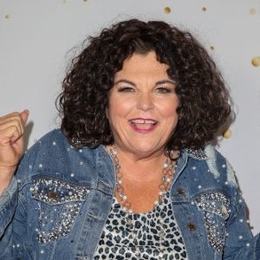 An American comedian Vicki rose to fame after appearing in the 13th season of the television show America's Got Talent. Barbolak even reached the finals of the show, but sadly, she wasn't able to win the competition. Similarly, Nick at Nite named her as one of the Funniest Mom in America.

Along with a prolific career, the 62 years old renowned comedian Vicki Barbolak has a blissful married life. She is not married once but thrice. Even two failed marriages did not stop the comedian from falling for a new guy.

Currently, Call Me Crazy cast is in a conjugal relationship with her third spouse, named Lou Brockman. However, Barbolak is quite secretive and does not reveal much information about her relationships with the media. 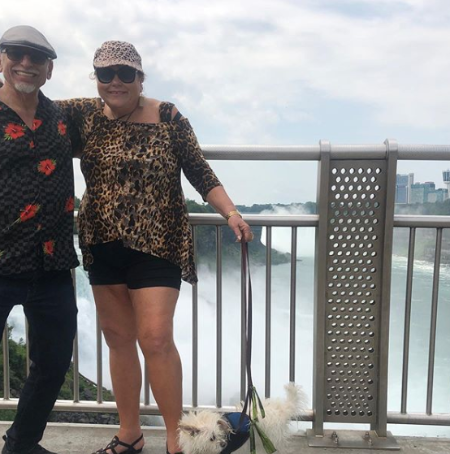 Vicki is yet to disclose the details on how and when she met her partner. As per the source, her husband works at Comedy Store. Further, the information about her wedding is also still concealed.

She hasn't disclosed the actual date and place of her marriage. However, she celebrated her 25th wedding anniversary on 12th September 2018, just a few days before the finals of America’s Got Talent. Thus, they were probably married on 12th September. 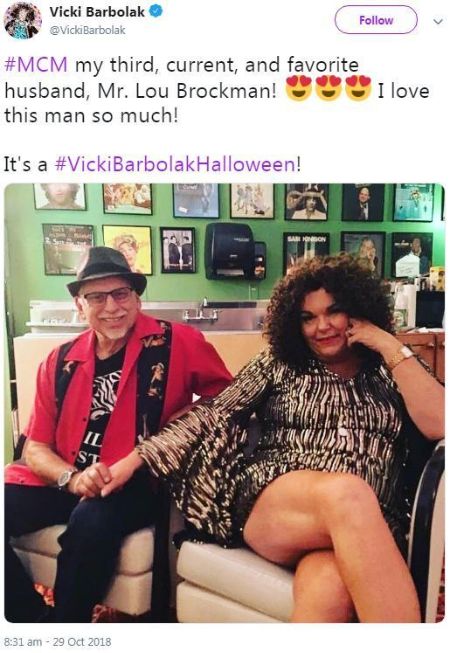 Vicki Barbolak and her spouse on their 25th wedding anniversary SOURCE: Twitter (@VickiBarbolak)

Even though Barbolak is of secretive nature, she does not hesitate to talk about her married life on interviews and shows. She shares a good bond with her partner in crime and further shares photos with him on her social accounts.

On 29th October 2018, Barbolak shared a photo with her husband on Twitter and wrote;

"#MCM my third, current, and favorite husband, Mr. Lou Brockman! I Love this man so much! It's a #VickiBarbolakHolloween!"

Thus, as per her status, she was married twice before getting hitched to her current spouse Lou. Nevertheless, the comedian hasn't disclosed the details of her previous marriage such as the identities husband and the date of their wedding bells. 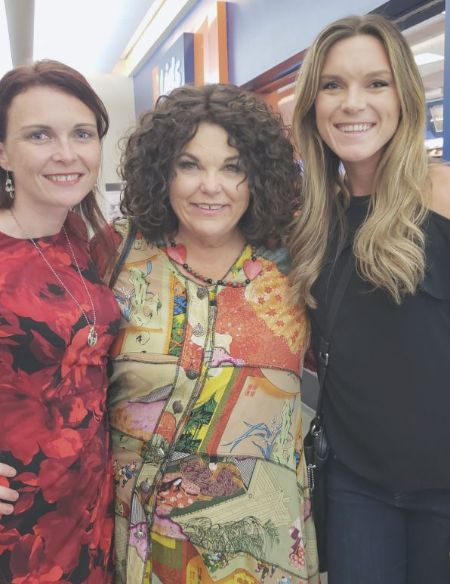 From her former relationship, she has two kids, daughters Lily and Emily. Both of their children are now grown up and already married.

Vicki Barbolak took the first class of comedy at the age of 38. She decided to be a stand-up comedian after watching a short ad. Barbolak took classes with Mitzi Shore, an owner of The Comedy Store. She shared about the starting of her startup saying;

“I took Sandi Shore’s class at The La Jolla Comedy Store, and I think that was 1997. I brought three large books with me, three really big books and I wore fake glasses so everyone would think I was smart. It totally worked! How pathetic.” 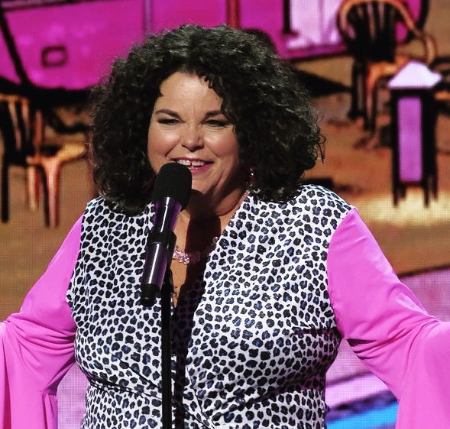 In addition, she also portrayed in the movie Pickin' & Grinnin in 2010. Vicki further goes on tours regularly to different places.

A comedian in the United States earns an average salary of around $20000. Thus, Barbolak also probably receives the payrolls in the same range. Whereas some of the highest-paid comedians like Jim Gaffigan and Dave Chappelle receive a salary of around $47,000,000 and $30,500,000, respectively.

Apart from this, she also owns a wedding company named Wedding Van. From her multiple professions, Barbloak summons a good amount of money. As per some online tabloids, she makes an average annual income of around $700,000. Hence, her net worth is probably in a few million-dollar marks.

Like other famed celebrities, Vicki Barbolak also mostly remains busy with her handful of projects. She frequently goes on tours and performs in different places and countries. Vicki will be performing at Jimmy Kimmel's Comedy Club in the LINQ Hotel | Las Vegas NV on Tuesday, November 19, 2019.

Similarly, she will perform at Comedy at The Carlson | Rochester, N, from 21st November to 23rd November. Moreover, she is also set to perform at ROAR! Comedy Club MGM Grand, Sunflower Resort | Surprise AZ, Mesa Regal Resort | Mesa AZ, and others in 2020.

An American stand-up comedian Vicki Barbolak is in a marital relationship with her third husband Lou Brockman.

Lily is the daughter of an American comedian Vicki Barbolak and her former spouse whose identity is still unknown.

An American comedian Vicki Barbolak and her ex-husband, whose identity is unknown, has a daughter Emily.