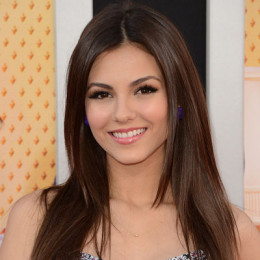 A beautiful and Gorgeous versatile American actress and also a singer and songwriter Victoria Justice who has made appearances in many shows premiere and also appeared in several Nickelodeon series. She was born to Zack Justice and Serene Justice. She rose to fame playing as Lola Martinez on Zoey 101 in the 2000s. Some of her famous movies include The Boy Who Cried Werewolf, Naomi and Ely's No Kiss List, and The First Time.

Victoria Dwan Justice was born on February 19th, 1993 in Hollywood Florida. He was born to parents Serene and Zack Justice.  She has half-sibling named Madison Grace. Her parents are of English, German and Irish and Puerto Rican descent.

She completed her high school at the Cleveland High School. She started an acting career when she was just 10 years old. She rose to fame from movies like Victorious, True Jackson, VP, The Troop, The Penguins of Madagascar etc.

Victoria started her acting journey from a very young age. Justice was accepted into the musical theatre program at the Millikan Performing Arts Academy in Los Angeles. She debuted on the small screen by appearing in many series as a guest role.

At the age of 10, Justice guest starred on the Gilmore Girls. She landed a walk-on role as Jill No,2. To pursue her acting career Victoria and her family moved to Los Angeles. Justice has also guest starred on the hit Disney show Suite Life of Zack and Cody where she played the role of Rebecca.

Victoria is currently dating boyfriend Reeve Carney. The couple started dating in October 2016. Previously she dated Pierson Fode(2013-2015) and Josh Hutcherson. She was also rumored to be dating her Victorious co-star Avan Jogia, but the rumored couple claimed to be only friends.

Victoria Justice has been acting from a very young age. She is estimated to have $8 million net worth.