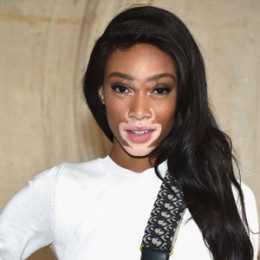 Canadian fashion model, spokesperson, and activist, Chantelle Brown-Young is also known as Chantelle Winnie. She competed on the 21st season of The CW's America's Next Top Model. She was diagnosed with chronic skin condition since the age of four. In the year 2013, she opened the door for her career in modeling after she was asked by Shannon Boodram to be a part of Shannon's YouTube music video Natural Me.

Chantelle Winnie was born as a Chantelle Brown-Young in Toronto, Ontario, Canada, on July 27, 1994. She is the daughter of Windsor Young and Lisa Brown. Winnie grew up with her sister Christina Harlow.

Winnie belongs to Canadian nationality and ethnicity wise, she is of Jamaican descent. In her early age of four, she was diagnosed with the chronic skin condition medically termed as depigmentation of portions of the skin.

Due to that condition, she faced a lot of hardship at the young age. During school days, she was bullied for her unconventional looks and was also called ‘cow zebra’ by her friends.

Chantelle’s skin affected her personal life. The constant name calling at school depressed her. She then decided to drop out and discontinue her studies. She even thought of committing suicide.

Winnie modeled for the fashion magazines including I-D and Dazed as well as fashion website Showstudio.com.

Chantelle Winnie, 22, is not married yet. Currently, she is allegedly dating British F1 racer, Lewis Hamilton. Recently, she partied with him, celebrating his victory in The British Grand Prix 2017.

In September 2016, they were first spotted getting close at the GQ Awards. Since then the pair has grown close and in May 2017 when they were seen at the Amar Gala in Cannes. However, Winnie is yet to speak about her relationship with world champion racer Lewis Hamilton.

Other than that, model Winnie is more active on social networking sites including Facebook, Twitter, and Instragram.

Chantelle Winnie modeled for the several big brands including Italian clothing brand Deisel, the Spanish and Italian editions of Glamour magazine and many others. Winnie has an estimated net worth of $3 million, which she accumulated from her modeling career.

Chantelle is 5 feet 10 inches tall and her weight is around 52 kg. She has an hourglass body with her body measurement of 34-25-36 inches.