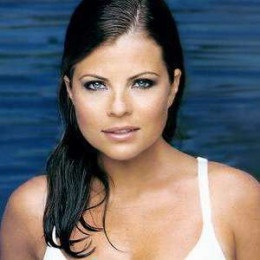 Yasmine Bleeth is happily married to strip club owner Paul Cerrito on 2002 in California. Currently, they are still together and live in Los Angeles and Arizona with no signs of divorce. The couple is yet to share any children.

Initially, Bleeth dated Matthew Perry in 1996 but broke apart after a few months of the relationship.

Yasmine Bleeth has a net worth of $2 million which she accumulated from her short-lived acting career.

Yasmine Bleeth was born on June 14, 1968, New York City, U.S. st on a soap opera called 'One Life To Live'. She is a daughter of Philip and Carina Bleeth (Died-1988). Bleeth was only 10 months when she appeared in the television commercial-No More tears Baby Shampoo of Johnson and Johnson.

When she was six years, she was on Candid Camera and after that, she appeared in the Max Factor cosmetic advertising campaign in which she was with the model Cristina Ferrare. She was starred in a short-lived series of Titans in the year 2000. She was also a crazed beauty queen in 'Crowned and Dangerous'.

She met her future husband, who is a strip club owner Paul Cerrito in Promises Clinic when she was staying there. They got married in Santa Barbara of California in the year 2002 and they lived in Los Angeles and Scottsdale, California.