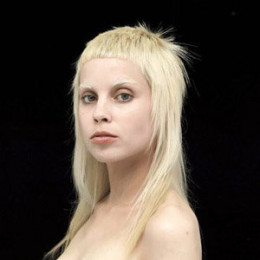 Yolandi Visser aka Anri du Toit is a famous singer, rapper, and an actress. She is the female vocalist in the group Die Antwoord.

A singer and actress, Yolandi Visser is currently dating Watkin Tudor Jones better known as Ninja. They are in the relationship since their early adulthood. They often post several pictures of them on social media.

The couple is together for years but is not married yet. Years after dating, the pair welcomed a daughter, Sixteen Jones in 2006.

Yolanda Visser has an estimated net worth of $10million. She makes her money from his singing and acting career.

Yolandi Visser was born Anri du Toit on 1st December 1984 in South Africa. She is widely known as a vocalist in the South African Rap/Rave/ZEF group “Die Antwoord”.

how did i get myself into dis mess!! #babyme #southafrica #vuil

As an actress, she has starred in the 2015 film “Chappie” and the short film "Umshini Wami". Yolandi is also famous for her outrageous and provocative fashion choices onstage and in music videos for singles like "I Fink You Freeky." Visser appeared in several of their music/art videos.

The couple has been blessed with one daughter named, Sixteen Jones but she has not revealed her daughter's date of birth in her bio.