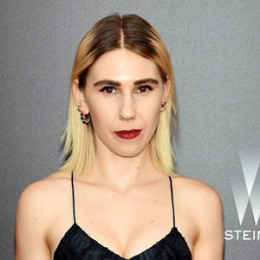 HBO's Girls fame star, Zosia Mamet is a promising American actress and musician. She is best known for her appearances in TV series like Mad Men, United States of Tara and Parenthood. She is active in the film fraternity since 1994. Mamet is a married woman, she tied the knot with the actor, Evan Jonigkeit. She has earned an impressive amount from her acting career.

Zosia Mamet was born Zosia Russell Mamet on February 2, 1988, in Randolph, Vermont, U.S. She is the daughter of David Mamet, American playwright, essayist, screenwriter, film director and  Lindsay Crouse, who's also an actress.

Mamet is American and belongs to the mixed ethnicity. Her father is Jewish and mother is Buddhist but she identifies herself as Jewish. She has one sister Willa Mammet, an actress and director and two half-sisters, Clara Mamet and Noah Mamet.

Her maternal grandfather Russel Crouse was a playwright and her maternal great-grandfather John Erskine was an educator. Mamet lived in New England until the age of 5 before her mother moved to Pacific Palisades, California with Willa and Zosia.

Zosia Mamet enrolled herself in acting just after her high school instead of joining college.

Zosia Mamet started her acting career in 1994 with a minor role in series Parallel Lives. She debuted in films with 1997 movie, Colin Fitz Lives! but her appearance goes uncredited. Later, she featured in political thriller Spartan as 'Bedouin Woman'.  Some of her film credit includes, Off the Ledge, The Kids Are All Right, Greenberg, The Last Keepers, Bleeding Heart, Wiener-Dog, Dominion, Goldbricks in Bloom, The Boy Downstairs and others.

Mamet rose to fame after she signed with series, Girls with HBO in 2012 where she portrayed the lead character of Shoshanna Shapiro. She has appeared in several TV series such as The Unit,  War Wolves, United States of Tara, Parenthood, Mad Men, High School USA!,  Star vs. the Forces of Evil.

Aside from being an actress, she's also a singer. In May 2013, Zosia Mamet along with her sister, Clara Mamet dubbed themselves as "The Cabin Sisters" and released their first song, Bleak Love on the crowdfunding site 'Kickstarter'.

However, the sisters received heavy criticism for their project highlighting the expense of the project, the gifts offered in return for money pledged as it cost $25 to download their album and 45 minutes Skype call cost $2,000. They aimed to raise $32,000 but after  11 allocated days, less than $3,000 was raised. She also has a band, Chacha.

In 2018, Marta is all set with her new venture, Under the Silver Lake directed and written by David Robert which is in post-production.

Zosia Mamet has an estimated net worth of $3 million. She earned millions from movies and TV series. In 2010, her movie, The Kids Are All Right earned $34.7 million and received 7 stars from IMDb. Additionally, her popular TV series, Girls rated 7.3 stars by IMDb as well as the series was commercially successful.

Zosia Mamet is happily married to her longtime boyfriend, Evan Jonigkeit. The duo tied the knot after few years of dating in October 2016. Jonigkeit is also an actor known for his roles in A-list movies including X-Men: Days of Future Past, Bone Tomahawk, and Easy. The couple first met in 2013 and eventually fell in love.

Once in an interview, Mamet talked about her battle with eating disorder,

“This struggle has been mostly a private one, a war nobody knew was raging inside me, I tried to fight it alone for a long time. And I nearly died.”

Mamet is an animal lover, she has a dog named 'Moose'. She raised her voice for animal rights and involved in different projects related to animal welfare. She is active on Instagram and as of 2018, she has more than 204k followers.

Evan Jonigkeit is an actor best known for his roles in X-Men: Days of Future Past, Bone Tomahawk, and Easy.