Home Article Hollywood's favorite couple Kristen Bell and Dax Shepard shared the secret behind their successful marriage: "We have a very healthy marriage and we got there by doing therapy when we needed it"

Hollywood's favorite couple Kristen Bell and Dax Shepard shared the secret behind their successful marriage: "We have a very healthy marriage and we got there by doing therapy when we needed it" 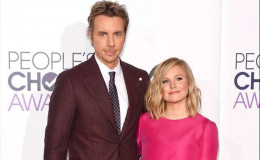 The wonderful love story of Kristen Bell and Dax Shepard, the couple has been married since 2011 and living happily with no divorce rumors, have two beautiful children.

There are probably only the limited number of couples who has been happily married with a single spouse without any divorce rumors or affairs.

Most of them include the talented actor Tom Hanks and beautiful wife Rita Wilson, versatile actress Merryl Streep and husband Don Gummer, Sarah Jessica Parker & Matthew Broderick and so on.

Today we bring you one of the ideal couples in Hollywood who has been together through every thick and thin, working out their marriage in the most unbelievable way.

The wonderful love story of Kristen Bell and Dax Shepard is something the entire world should know. So, let's find out everything about this perfect couple right here.

Well, it's the universal truth that there's no perfect marriage or perfect couple in real life. We all have problems and differences that can cause a marriage to fall apart.

Even the industry's ideal couple, Kristen, and Dax have revealed that their secret to happy marriage is couples therapy.

#tbt to when I cried at our wedding and @daxshepard thought it was really funny.

Mirror.co.uk reported that the pair has made it so far by doing therapies that are needed. She quoted,

"We have a very healthy marriage and we got there by doing therapy when we needed it, and constantly doing fierce moral inventories.

We both take responsibility when we are wrong, and I think it is easy to work with him because I married him, because I enjoy spending time with him and I trust him. That is exactly what I want in someone that I work with."

Kristen confessed that they used to have a lot of fights during the first year of their marriage that she even at some point refused to hold onto the relationship anymore.

Despite all this, the couple didn't give up and hold strong onto each other, working out on every aspect of their marriage. She further shared,

One thing I like to reiterate ... is that we've done a lot of work on our relationship. We're very focused on staying together. We've made a choice to love each other but realise relationships are a lot of work. I think it's responsible to be honest about that.

Thank u to my hot date tonight, @daxshepard. I love date night with you. @goldenglobes #GoldenGlobes

Now, this ideal couple lives happily with a perfect family in their grand mansion in New York City, New York.

A love story that began at a birthday dinner

One of the Hollywood's cutest couples, Kristen and Dax had first laid eyes on each other back in 2007 in a mutual friend's birthday party.

However, unlike other love stories, it was not a love at first sight for the pair. In an interview with Good Housekeeping Magazine, Dax revealed that it was "not electric" at first. 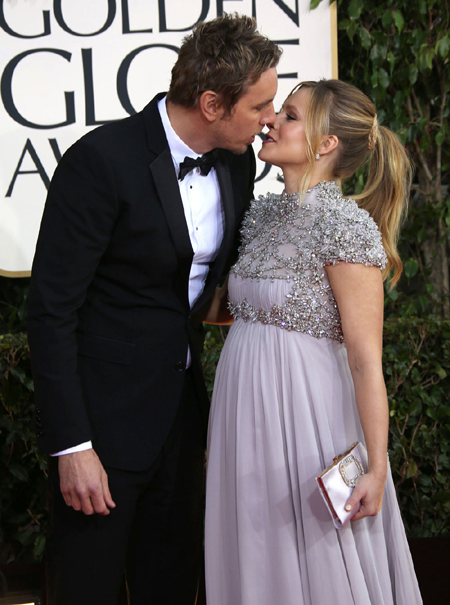 "When I met her and her friends, I was suspicious of their unbridled happiness, I thought, 'Something stinks here; they're in a cult."

Later, after two weeks they met again and it was on from that point. Their love story was pretty much of a rollercoaster ride as both had a completely opposite personality. 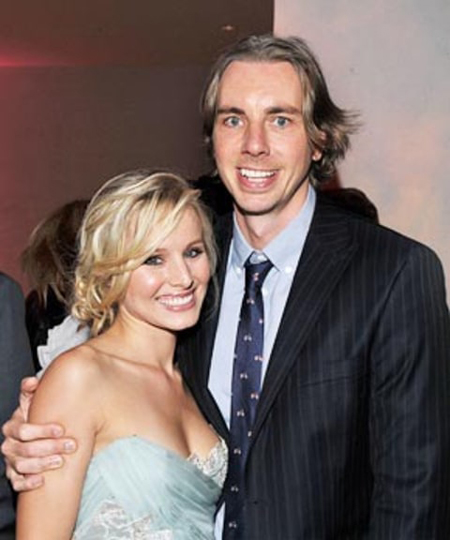 Kristen told Flare magazine about how terrified she was that their relationship would not work out. She stated,

"He was a drug addict and he was wild, and I was very much a good girl who went to Catholic School, did great in college and started working immediately."

Dax too confessed about his troublesome past of addiction and quoted,

"All the things I'd done were terrifying to her, and she had a hard time believing I would ever be able to stay married and monogamous and a father and all those things."

For the first year and a half we were together, that was what we battled over almost weekly." 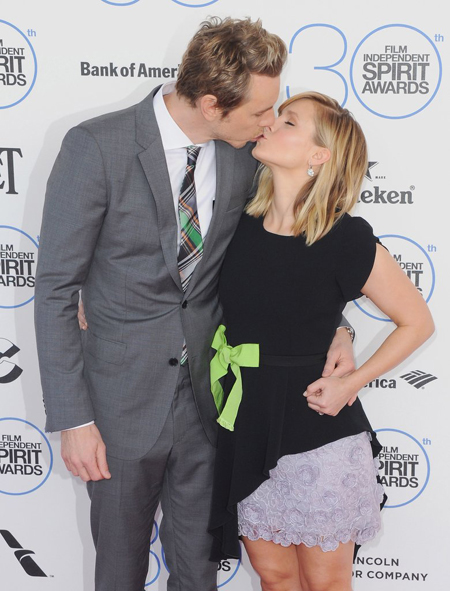 Despite all the odds, this imperfectly perfect couple got engaged in 2009 and now have a wonderful family together.

We'll tell you more about their happy family later, but first, let's find out how they got married.

Dan and Kristen wed in a courthouse costing only $142

After getting engaged, the "When in Rome" co-stars didn't even for a second planned for a glamorous wedding.

These beautiful souls made a vow to not get married until same-sex marriage was legalized in California.

Finally, the state of California legalized the marriage in 2013 and the actress proposed her fiance' Dax in her Tweet, stating,

"Will You Marry Me?Xo #marriageequality #loveislove. Aren't they adorable? 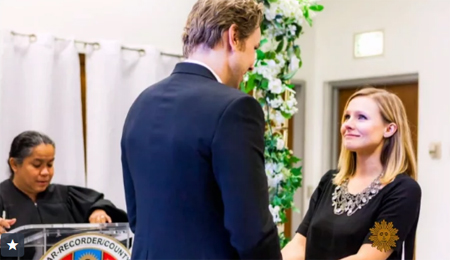 Unlike all the hot-shot Hollywood celebrities with all their grand-billion dollar weddings, the wonderful couple, Dax, and Kristen chose to have a simple wedding costing only $142!

During a recent interview with CBS's Sunday Morning, Kristen said their wedding day "is still one of the best days of my life.

Not only this, this powerful couple even decided to get a matching tattoo instead of going for the traditional ring exchanging! This bad-ass couple couldn't be any cooler. 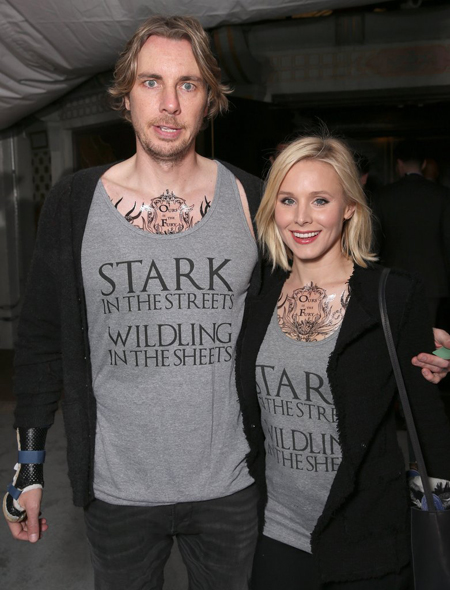 The perfect couple, Dax, and Kristen have added to more blessings in their lives- two beautiful daughters. 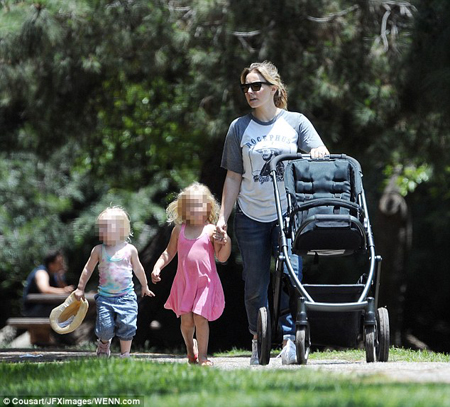 SuperMom Kristen with daughters talking a stroll in the park on 23 January, Source: Daily Mail

Their first daughter, Lincoln, was born in March 2013, and their second, Delta, in December 2014.

This protective mom-dad duo has always opted for keeping their kids away from cameras making sure they aren't photographed by paparazzi or seen in the public eye. 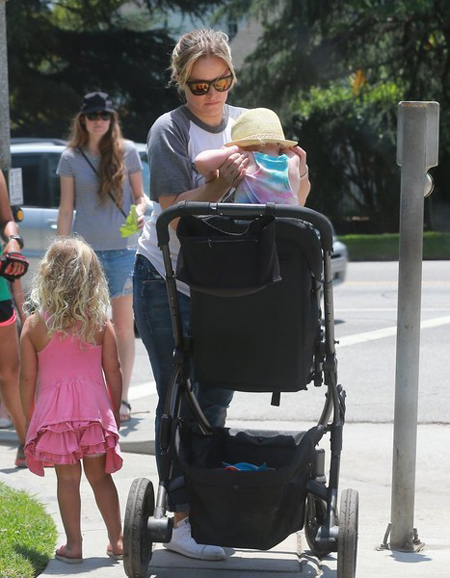 We really wish them the lifetime of happiness and togetherness to this inspiring couple and hope that they remain the way they are till eternity.