Billie Eilish is a musician, singer, and songwriter who achieved a lot within her short musical journey. The young kid, 17, recently made it to the headlines after her alleged relationship with someone special.

Despite being skeptical about dating, she has had rumors going around frequently. Billie has cult fans, the career, and huge Instagram followers. But does she have a partner? Let's find out!

Is American Singer Billie Eilish Dating Anyone? Rumored To Be Gay?

Although there is no precise answer about her sex, many people already assumed that the young kid might be homosexual.

Taking a glave at her steps, the 17 years old lady is likely to hang out mostly with a same-sex person. And that includes most recently her dating rumor with Danielle Bregoli. What is it? Is she really dating Danielle aka Bhad Bhabie?

Recommended: Danielle Bregoli age 14, is already Dating. Who is her Boyfriend?

The answer is NO! According to Billie Eilish's rep., Eilish and Danielle Bregoli are not dating!

In the meantime, Eilish also addressed the rumors via her social media, posting a picture of herself, captioning, 'I'm not dating Danielle y'all stupid that's my baby sister.' 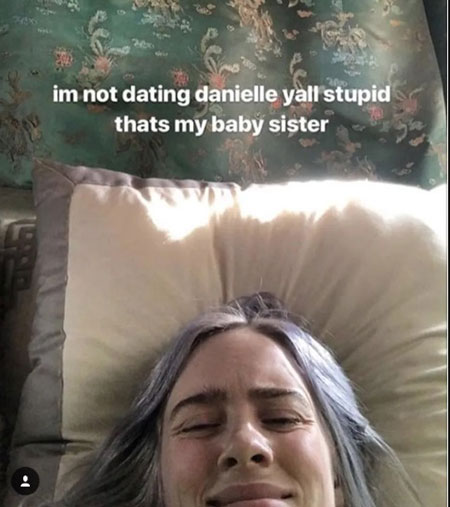 Nonetheless, there is currently no marking clue about her sexual orientation.  Neither she has a history of dating any men in her life.

The singing bee is probably more focused on building her career rather than taking a walkthrough in a love-life relationship at the moment.

Billie Eilish currently appears to be single, that doesn't mean she's not dating anyone. She may be dating someone in private, yet remains cryptic ton about her romance. Or it also maybe she's waiting for a handsome prince to appear in her life.

"When We All Fall Asleep, Where Do We Go?" Star Billie Eilish Rise To Career And Controversy

From her very young age, Billie showed a keen and flair interest in music. While she was just eight years old, Billie joined the Los Angeles Children’s Chorus. By the time she turned 11, she started writing her own songs and singing. 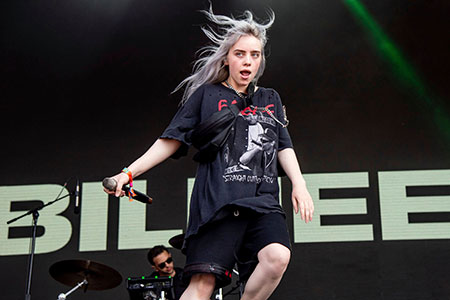 In early 2016, she dropped her debut single, “Ocean Eyes” on SoundCloud, along with a music and dance video attached.

By November that year, Ocean Eyes was re-released across the world in the acquaintance of Darkroom and Interscope Records. Subsequently, Eilish released another single, “Six Feet Under” after her first hit.

In January 2017, Billie dropped four EP remixes of Ocean Eyes, and by February, she made another single, “Bellyache” co-written and produced by her own brother Finnaes.

Well, the single got backed-up by a music video directed by Miles and AJ. And later that month in March 2017, Eilish released the track “Bored”, which served as the soundtrack for the Netflix series 13 Reasons Why. Since then, her career ship rocketed giving her opportunity on the various platform.

With the release of her new single "Wish You Were Gay", Billie received a lot of criticisms from her fans as they found it to be offensive. While fans actually thought the song to be a queer anthem, fans offended her as she said that she wished a boy who didn't love her back was gay.

"I can't tell you how much I wish I didn't wanna stay/ I just kinda wish you were gay."

During an interview with PopBuzz in September 2018, she clarified that there's some sort of miscommunication about her intention. She explained,

"First off, I want to be so clear that it's so not supposed to be an insult. I feel like it's been a little bit misinterpreted. I tried so hard to not make it in any way offensive."

She released her debut studio album Where We All Fall Asleep, Where Do We Go? on 29th March 2019. The rising star has many more left to come and we wish a happy future journey to her! 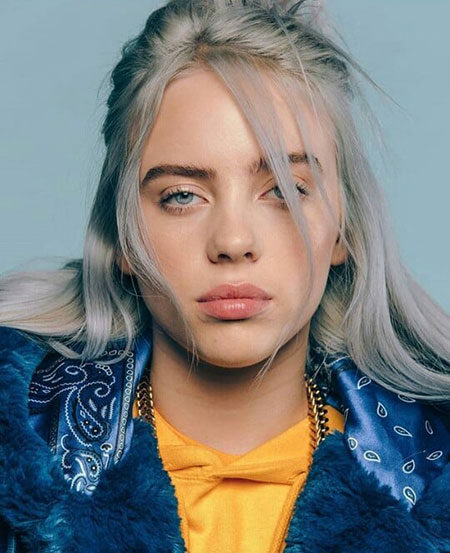 Billie Eilish
SOURCE: We Heart It