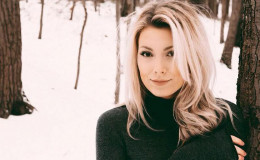 Bashing the popular belief that football players are just insensitive brute men, Will Grier has proved that there is also a romantic side complementing the athletic side. He proves to the world how love can enrich and prosper every aspect of your life.

His athletic abilities are praised in a significant amount but his perfect love life is not discussed enough. We are going to explore the rather less talked about aspect of Will's life with the details about his wife, married life, and past relationships as well.

Are Will Grier and wife Jeanne O'Neil Divorced?

Will Grier, the Carolina Panthers quarterback and wife Jeanne O'Neil aren't divorced yet. In fact, the duo is living a sound life without any rumors of extramarital affairs and separation.

They are united as life partners for over five years now and blessed with two adorable kids. Most notably, Grier and O'Neil welcomed their second child, a baby number two Adeline James Grier on 28 January 2020.

The athlete shared happy baby news via Instagram with a cute snap of his baby on 30 January 2020 captioning with her name and a rose emoji. In the post, one may see him desperately holding her in his arms.

Similarly, a week before Will, Jeanne and Eloise had gone for a long drive in their lavish Black Chevrolet car. The NFL draft star is a family man who prefers to spend a good time with his partner and children in the meantime rather than getting busy with his colleagues and practices.

Will Grier's Married Life With Jeanne O'Neil: Is He Balancing His Life As Husband, Father and WVU Quarterback? What About His Past Affairs?

Will Grier is currently married to Jeanne O'Neil. The couple first made each other's acquaintance while studying together at the University of Florida back in 2014.

Jeanne was a student at the University and a Tampa Bay Buccaneers cheerleader. During that time, Will was on the verge of commencing his football career.

Will Grier with his wife and daughter.
SOURCE: Sports Illustrated

After crossing each other's path a couple of times, the duo started dating and fell deeply in love. Will is a romantic person he left no stone unturned to make Jeanne feel special.

Jeanne Marie Grier exchanged rings with husband Will Grier back on July 26, 2016, in a private wedding ceremony, after enjoying the wonderful relationship for around two years.

To add up, at the time of their wedding Jeanne was pregnant which has been thought by fans to be the reason for the marriage. Rumors have it that when she became pregnant she wanted to keep the baby and this compelled the football player to take the step up leading to marriage.

Just after around three months of the wedding, Jeanne Marie welcomed their first child, a beautiful baby girl, Eloise Marie Grier on November 9, 2016. The couple is living a blissful family life-enriching each other in the best way possible. Truth be told, they are one of the most beautiful young family out there.

The couple is living a very fulfilling married life in each other's company as of now and is nowhere near the exit door. The couple also is very active on social media and are often seen sharing family moments with the public.

Before finding his romantic solace in O'Neil, he was dating Taylor Walker, also a University of Florida alum. They shared a very romantic relationship until 2014 when their relationship dusked without any disclosed reason.

Will Grier’s career in football took flight while he was in the University of Florida back in 2014. Grier and Treon Harris were hard to be Jeff Driskel's backup as a freshman in college. As a Redshirt Freshman, he once again competed with Harris to be the starting quarterback in 2015.

Although Harris started the first game, Grier too received playing time and made an impact, attempting 18 passes and completing 16 for 166 yards with two touchdowns. With his performance in the first game, Will Grier earned the chance to start the second game.

In the fourth game of his college career against the Tennessee Volunteers, he made a major impact and played a groundbreaking role in Gators 28–27 victory. With 5 minutes left in the game, Gators were down 14-27. Grier threw 2 touchdowns to take the stand.

The game against the Ole Miss Rebels has been the best game of his career so far. Gators eventually won the game 38-10.

In the game, Grier threw his four touchdowns in the first half and became the first Gator quarterback since Chris Leak in 2005 to accomplish the feat. In 2016, Grier shifted from Florida Gators to West Virginia University.

You May Also Like: Is NFL player Khalil Mack Dating Anyone or Married? See his Career and Net worth

Since then his career has no sign of slowing down. He currently showcases his skills as quarterback for the West Virginia Mountaineers. He also played for Florida Gators. Furthermore, he became Mr. Football USA for his astounding athletic skills in the field.