Home Article 31 Years Korean-American YouTuber David So Dating a Girlfriend: What About His Past Affairs?

31 Years Korean-American YouTuber David So Dating a Girlfriend: What About His Past Affairs? 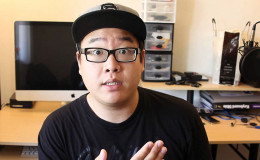 David So is a man with multi talent! Most of you know him as a comedian on his famous YouTube channel but do you know that he is also an actor, singer, writer, and entrepreneur? Garnering huge fans on YouTube, he's been everyone's favorite.

When So revealed about his love life for the first time on Instagram, his fans hardly believed his words but he truly bears a lovely girlfriend. Wanna know more about his girlfriend? Let's move on!

David So's Current Relationship: Who Is His Girlfriend?

David So enjoying a romantic Vacation in Hawaii with Girlfriend Mariel Song.

So who confirmed his dating life with Song via Instagram post, later, took YouTube sharing how the pair first met and gained an instant connection. In the video, he mentioned that he met the love of his life via a friend of his.

"I didn't really know anything about her other than the fact that I met her through one of my friends."

Enjoy the full video of David So explaining how he met his girlfriend and how's everything going on!

Not just David, his girlfriend Song is also active on social media and she shares beautiful moments of the duo with her fans. Have a look at one of her Instagram posts where she celebrated the birthday of her boyfriend on 30th March.

So is currently living a blessed life with his partner in Los Angeles, California. He mentioned in the above video that when one is on social media the person feels pressure to share every of his personal stuff with fans but So prefers keeping most of his affairs behind the bars.

While his personal life is no more a mystery, we are heading forward to see the two walking down the aisle soon!

David So's Professional Career: How It All Started?

So started his career as a stand-up comedian performing in northern Carolina at the age of 16. He was studying in college when he performed comedy for three years.

Later, he decided to leave college to spend all his time in comedy and start his YouTube venture. His first channel 'GeniusBrain' (formerly known as DavidSoComedy) garnered more than 1.4 million subscribers with over 290 million views. He has a separate channel "DavidSoMusic" which is solely focused on his love and passion for music.

Podcast is cool cause I can talk about all the stupid shit that I've done. Having a temper is so dumb. As I get older, when I lose my temper I reflect and feel ashamed of myself. Just because I feel I allowed someone to control my emotions. It makes me feel weak. But... sometimes... You just gotta break some shit. NEW PODCAST IS UP!!!!!!!!  @danielleslee my former producer opens up about being cheated on! Life lessons baby...

In 2017, he made acting debut in Justin Chon's movie Gook. It was the same year he was featured on Kevin Hart's Laugh Out Loud network.

Recommended: Meet the Top 12 most famous comedians of all time who have managed to make all of us laugh forgetting our pain

Meanwhile, he is also a restaurateur. He opened Drips & Swirls, soft serve ice cream and coffee shop in Los Angeles in August 2016. He collaborated with Joe Jitsukawa, Bart Kwan, and Dan Tran and opened Sip Matcha in February 2018.