Home Article 39 Years TV Personality J. D. Harmeyer Dating Someone or He Is Secretly Married and Enjoying Life With His Wife

39 Years TV Personality J. D. Harmeyer Dating Someone or He Is Secretly Married and Enjoying Life With His Wife 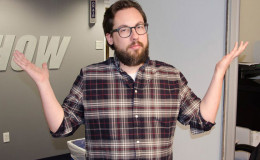 It is said that it is not people that are perfect but rather the relationships that the two imperfect people create and it is widely seen as two flawed humans fit in each other's lives like pieces of a puzzle.

And apparently, the not so perfect famous personality, J.D. Harmeyer has found his perfect half that completes his life and the true love of his life.

J. D. Harmeyer, an American actor, and director bought his wife a $450 Gucci belt on September 11, 2019. During an interview at Howard Stern Show, JD said he wanted to and he can though it is too expensive. He paid that money through a credit card.

Some people even claimed that Harmeyer did so just to show off his wealth.  JD's spouse Jen Tanko is a founder of the "BTR Coaching" Fitness and Yoga training center. The actor and his fitness instructor's wife are desperate to love each other. Yet, they prefer to stay under the radar.

JD Harmeyer is officially married to Jennifer Tanko on 25 August 2018. The Howard Stern Show staffer wed his beautiful bride just outside of Las Vegas with 10 relatives in attendance to bear witness to the joyous occasion.

At first, there was news that the wedding would likely take place either in New York City or in Florida near his mother but it changed.

J.D Harmeyer moved in with his girlfriend in November 2016, revealing at the time that while they currently have no plans to start a family, she was hoping to get married sooner rather than later. Although Harmeyer is a personality, the personal details about his wife are still unclear.

JD donned a grey three-piece suit with brown shoes to the ceremony and revealed he got a facial beforehand but suffered a small panic attack due to the use of hot towels during his treatment.

That didn’t stop him from walking down the aisle, though, and delivering a revised set of vows which proved far more eloquent than his first attempt, thanks to some assistance from Howard and Robin.

“You helped me realize what vows actually were."

The experience was so moving JD even shed a few tears after hearing both his mother and father begin to cry. He said it was surreal and he was barely holding his emotions in. He added,

“I held it together and then we walked back up and I saw my dad crying and I just broke down.”

While JD said there was “no talk of kids,” the couple said they do want a dog and there’s no ruling out a new addition to the Harmeyer family.

Before the couple got hitched, Harmeyer ruffled with the Howard Stern show crew. The initial hassle was regarding the method JD had used to reveal to the world about his engagement.

JD announced his engagement through Twitter by posting a pic of the ring and not the Howard Stern show which put a bad repo of him with Howard.

She said yes. (Thanks to @IHSS of course for everything) pic.twitter.com/0OjYLQubZA

Stern said that his initial happiness for his longtime employee quickly turned to rage when he realized that the announcement should have been made live on the show, not via Harmeyer’s personal social media feed.

But eventually, all got forgiven and forgotten and Howard even shared the first picture of JDs' wedding on his Facebook.

After the engagement, a new issue arose as news came that none of JDs co-workers were invited to the wedding as he wanted a private wedding of family only but still a few opted to get JD presents anyway.

The uninvites shocked Howard and Robin, as Ronnie was also uninvited the one although he was the one who drove JD to Philadelphia and helped him pick out an engagement ring. But JD explained that there would be a separate party for all the friends and colleagues.

Must Read: Once Rumored to Be Dead actor Arnold Vosloo is Happily Married To Wife Silvia Ahi

Although they faced a few of these problems, the marital ceremony went great and the smile on JD's face was worth seeing as Jennifer even took his last name. Regardless of everything, it seems everyone is happy for the perfect bride and groom.

39th birthday dirt cake thanks to my lovely wife @jtankoharmeyer. Thank you everyone for your birthday messages

Harmeyer's wife surprised him with an amazing birthday cake on his 39th birthday. He thanked his wife along with all the well-wishers who sent him birthday messages.

Some Interesting Facts of J.D. Harmeyer