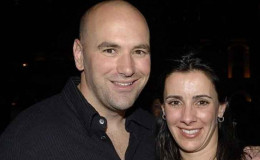 The most important primary resource you need for becoming a successful professional in any field is true love. Dana Frederick is a kind of great persona who succeeds in every field he steps into.

However, his journey to becoming the president of such a popular organization was not that easy. If you know White's dedication in his business, you might be interested to know about his private life as well.

Read everything you want to know about Dana White's relationship with his wife and children.

Dana White is the hero behind UFC's big names like Conor McGregor and Ronda Rousey. In spite of having such great popularity both personally and through the organization, Dana likes to conceal his private life from the media.

Also Read: What is Michael Boulos's Net Worth?

But he cannot keep his private life secret all the time because the world somehow knows about his family as well.

Dana White and Anne Louise Stella were pronounced man and wife on November 8, 1996. Family members and friends from both parties attended their wedding but not many people.

This couple is parents to two sons and a daughter: Dana White II, Aidan White and Savannah White respectively. Regarding their children, not much information is available because both the couple keep their private life a low key. This pair, along with their children, currently live a prosperous life in their private home in Las Vegas, Nevada.

It has been 22 years since Dana formally began living with his better half, Anne and their relationship is still intact. Their love for one another is still equally worthy of appreciation.

Anne is a significant character behind her husband, Dana's professional success. She always stands by Dana's side and shares his highs and lows.

She played a decisive role in Dana's journey to become the UFC President. Moreover, Anne was the one who helped Dana overcome a neurological disorder called Meniere's disease.

This duo met for the first time as students at Hermon High School and they started dating from the time when they were 8th graders. Even so, it took them approximately a decade to finalize their decision to spend the rest of their lives together.

The White couple does not seem to enjoy virtual life because they do not share their private matters. Dana is active both on Instagram and Twitter but he never shares about his family. It is because he is too committed to his profession, hence, he presents himself as a businessman even in social media.

?Who wants a free trip to Vegas and go to the Khabib vs McGregor fight?! Link in bio?

He is a good daddy for his children. Dana once threw a lavish party on the occasion of his son, Aidan's 16th birthday. Rumor has it that he spent $1 million to celebrate his son's birthday.

Dana is unarguably a huge inspiration not only for fighters but also for others who think that money is the most important resource for one to achieve success. He is living proof that a good company is all it takes to become successful in your profession.

If it had not been for his wife, Dana probably would not have reached the level of success that he has today.

How Much Is Dana White's Net Worth?

He was once threatened by mobster Whitey Bulger and his associate Kevin Weeks to leave Boston for Las Vegas. They asked him money around $2500 which was like $25000 each.

Dana Frederick White Jr. was born on July 28, 1969, in Manchester, Connecticut, USA. He is a son of Dana White Sr. and June White. Dana and his sister, Kelly were brought up by their mother in Ware, Massachusetts.

Dana is of Irish-American ancestry and belongs to white ethnicity. He had a keen interest in boxing from a tender age but practiced it at age 17. White earned graduation from Hermon High School, Maine in 1987. This UFC champion stands at the height of 5-feet 11-inch and weighs 88 kg.