Home Article Basketball player Blake Griffin is no longer in a relationship with Brynn Cameron: Has two children together, Secretly dating Kendall Jenner!!

Basketball player Blake Griffin is no longer in a relationship with Brynn Cameron: Has two children together, Secretly dating Kendall Jenner!! 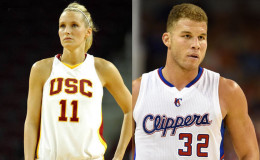 If you guys are crazy fans of basketball and NBA, then you surely know the talented and handsome basketball player, Blake Austin Griffin.

He is famous as a professional basketball player who plays for the Los Angeles Clippers of the NBA. This 5X NBA All-Star is one of the popular heartthrobs, and everyone wants to know all the personal details about him. After his split from ex-girlfriend Brynn Cameron is Blake dating a hot girlfriend secretly, perhaps a famous model/reality star Kendall Jenner??

So today let's find out all the information about him in today's section.

Entitled as NBA greatest rookies of all the time, Blake Griffin was in a relationship with his long-time girlfriend, Brynn Cameron for six years until August 2016, when sources confirmed that the duo split. 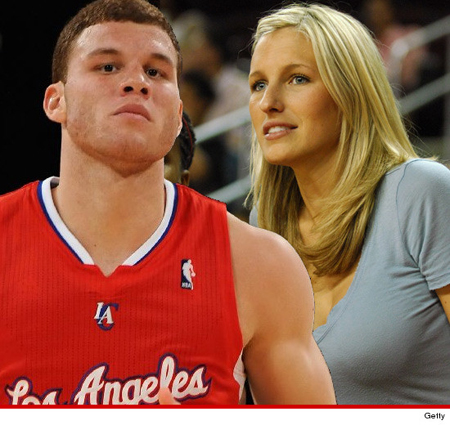 Brynn, who is also a former standout basketball player, playing at the University of Southern California, first met Blake Griffin in an NBA conference, back in 2012. She is the sister of former NFL tight end Jordan Cameron. 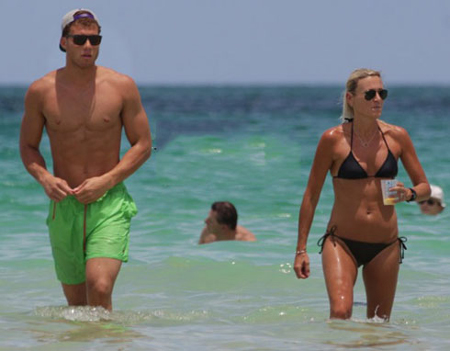 The pair were love struck in their first meeting and eventually started dating, and we all thought that the pair would get married soon, but they ended it just like that!

Despite the split, the duo has agreed on working together as the parents to raise their kids.

Although not married, the former adorable couple Blake and Brynn have been blessed with two cute kids, a son, and a daughter. 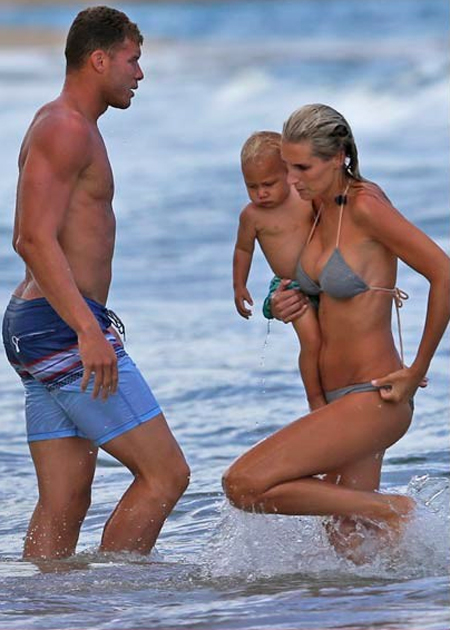 Brynn with beau Blake hanging out on the beaches of Hawaii, 2014
Source: Every News

They are proud parents of a son, Ford Wilson Cameron-Griffin, who was born on August 1, 2013, and adorable daughter, Finley Elaine-Griffin, born three years later in 2016.

In an interview with GQ magazine in 2014, Griffin revealed how he couldn't spend more time with his son. He quoted,

"I wish I was able to be around more.The thing I hate the most is being gone for like two weeks and only seeing him on FaceTime."

"I missed the first time he rolled over, which isn’t a huge thing, but at the time I was like, ‘Man.’ I had — not a breakdown, but I just had a moment where I was like, ‘This sucks!’ You know, just missing stuff like that. But at the same time, it makes the stuff that I don’t miss that much more special.”

Sources report that 32-year-old Cameron and 29-year-old Griffin, both earn $19 million a year from the NBA franchise which would compensate all the family and kids expenses.

Brynn Cameron Has A Son From Former Boyfriend Matt Leinart

The former USC basketball champion, Brynn and Heisman Trophy winner Matt Leinart were a power couple back in 2005 as both played at the same college, University of Southern California. 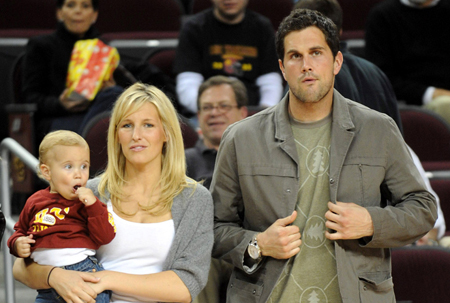 Brynn Cameron with former boyfriend, Matt Leinart and with son, Cole
Source: For the Win

In an interview with the NewYork Times, Cameron revealed how the duo first met and how they bonded so well.

"I met Matt in the study hall of USC and we bonded overy how we wore the same jersey for football and basketball.

At first I was uneasy speaking to Leinart, but later on his charm and sense of humor got me!" 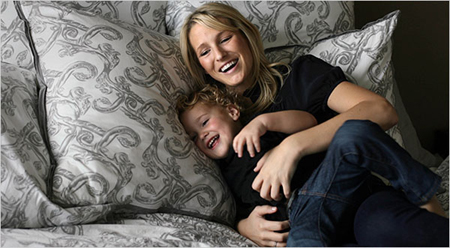 The pair started dating, and soon they turned into the proud parents giving birth to their first child, son, Cole Cameron Leinart, in 2006.

You May Like; Nicki Minaj confirmed she is single as she broke up with boyfriend Meek Mill: See their current relationship status

However, the pair split soon after the birth of their child in 2008, and now he lives with Brynn as she is the primary physical parent and gets $15K a month for child support.

All in all, Brynn is now living happily with beau Blake Griffin, and we wish them the lifetime of happiness and togetherness and hope they remain together forever.

While we all thought that Blake and Brynn might end up getting married, but there is a bad news guy!!!! As of 2017, the pair has broken up, and they are no longer together.

Blake has already moved on as he is rumored to be dating model Kendall Jenner. The duo is seen together in many places. Recently, they were seen together on the beach in Montauk. As per the source:

"It looks like the beginning of a new romance"

"They weren't all over each other, but they were inseparable. Kendall was hiding under a hoodie, and they wouldn't allow anyone to take their picture". 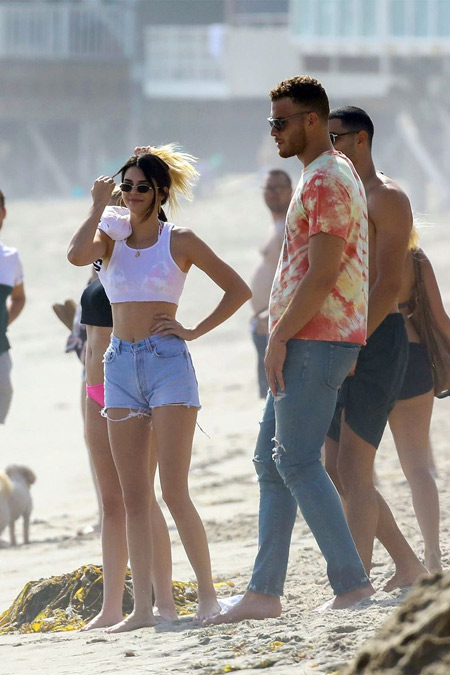 And just recently the duo was spotted spending quality time together soaking up the heat on a sunny day in Malibu over the Labor Day Weekend, sources reports. The alleged pair looked stunning in a white tank top, with a floral bathing suit stop inside while Griffin made it look casual wearing jeans and tie-dye tees.

Although the pair hasn't confirmed their relationship yet, it's pretty exclusive that she's dating the hunky NBA player.

Don't Miss; Actress Aubrey Plaza is in a live-in relationship with Jeff Baena. We might hear the wedding bells soon

Kendall was also in a relationship with Rocky but seems like they also have broken up. On the other hand, Brynn is living under the radar since her separation from Blake.

Recently Kendall and Blake were seen together having a meal at hotspot Carbone. The NBA star traveled all the way to NYC from LA to spend some quality time with his supermodel girlfriend.

On 17 September 2017, 'The Keeping Up With The Kardashians' star was seen leaving Craig's in West Hollywood, Los Angeles and as per the source, she was meeting Blake for dinner.

As per the source:

"Kendall and Blake are definitely dating and hooking up. They are having a good time together. It’s a little early to call them boyfriend and girlfriend. Kendall won’t settle down soon – she is busy and likes her freedom,"

They surely seem to be so much in love......what do you guys think of this couple!! do let us know in the comment section below!!!!

Brynn Cameron has filed a palimony lawsuit on 14 February 2018 against former fiance Blake Grifin, claiming, he is abandoning his children for a current model girlfriend, Kendall Jenner.

According to the lawsuit, "Grifin is a heartless cad who left his fiancee after "cruelly embarrassing his family with his public fawning over Kendall Jenner."

Blake Griffin's baby mama basically accused Kendall of being a homewrecker. Please! Kendall couldn't be that interesting even if she tried. In this week's epsiode we make the arguement that Blake is just your average f*ck boy. To listen hit the link in the bio or listen on iTunes!!! ??????

The suit further claims that Brynn has done so much for Blake and he should respect that.

"Cameron was not just the mother of Griffin's children and their caregiver, she was also a constant support for Griffin -- his personal assistant, meal planner, scheduler, stylist, publicist, party planner, nurse, nutritionist, branding expert, therapist, cheerleader, basketball and fitness consultant, and more."

The couple dated one another for some months and broke up in February 2018.