Home Article Find out the reason behind the divorce of Cat Cora and her wife Jennifer Cora.

Find out the reason behind the divorce of Cat Cora and her wife Jennifer Cora. 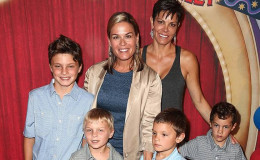 Cat Cora is an American professional chef best known for her role as ‘Iron Chef’ on the Food Network television show ‘Iron Chef America’. She is the first and only female Iron chef of the Show.

Cat Cora, married her long-term partner Jennifer Cora in 2013. They are a lesbian couple and has four children together. However, the pair got divorced Last year in 2015. Let us discuss their married life and children.

Cat Cora and Jennifer Cora tied the knot in 2013 when same-sex marriage became legal in the country. The pair was together for 17 years.

However, the couple is going to end their long-term relationship. Iron chef along with her wife Jennifer Cora filed for a divorce on the same day in 2015.

The reason behind their divorce

Celebrity chef Cat Cora and her wife Jennifer filed for divorce in October 2015.

According to the report, ‘It is with great sadness, that after 17 years, a tremendous amount work, careful consideration and heavy hearts, my wife and I have mutually decided to no longer remain married.'

Jennifer wants spousal support from Cat, who is financially strong than her and owns four restaurants along with the show Food Network.

In the divorce paper, the professional chef asked for joint custody of their sons while Jennifer has asked for full custody alone.

The duo has four children: Zoran, Caje, Thatcher, and Nash. The pair planned for the four kids and felt easier to raise two young babies together.

They gave birth to their baby through in vitro fertilization. Both used the same sperm donor for all pregnancies. Each of them was impregnated with two of the other's fertilized ova.

Though the kids are their biological child as they are a same-sex couple, they have to legally adopt their own children.

Cat Cora got very close with one of a reality star Brandi Glanville after filing a divorce. The celebrity chef and the Real House Wives of Beverly Hills Alum enjoyed a lesbian fling while working together on My Kitchen Rules, Program by Fox Reality.

The pair shared a picture together enjoying a night out smiling as they sat at the table full of wine glasses at Curtis Stone’s Restaurant but they stated that they are just friends.

Cora started dating producer Nicole Ehrlich in 2017. After a year of dating, the pair tied the knot at the Villa Verano Estate in Santa Barbara California on 21 April 2018.

Celebrate the women in your life and give them love and respect everyday Whether it’s your mother, sisters, friends, daughters, colleagues or wives- Acknowledge their achievements and strengths today! #WomensDay #WomenSupportWomen

"Today was such a magical day. I married the love of my life, Nicole Ehrlich, in front of all of our family and closest friends. To share our love and commitment to one another, alongside our six sons, was a dream come true. We couldn’t have asked for a more perfect day!"

Both of the gorgeous brides wore dresses from Kleinfeld Bridal.

It's almost been one year since the lovebirds tied the knot and they are planning to celebrate their first wedding anniversary in a grand way!