Home Article Elizabeth Warren Is Living Happily With her Husband Bruce H. Mann And Children; Know In Detail About Her Married Life And Relationship

Elizabeth Warren Is Living Happily With her Husband Bruce H. Mann And Children; Know In Detail About Her Married Life And Relationship 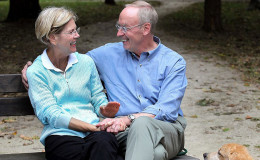 Elizabeth Warren is married to Bruce H. Mann and is happily living her life. She was married to Jim Warren before and has two kids with him. She has a controversy concerning her heritage.

Politics is a game of the minds and it takes a toll on any politician rendering them weak but if you have a supportive partner then the weight becomes bearable.

Elizabeth Warren is a Democrat and a senator from Massachusetts, who has such support in her life because of which she has soldiered many obstacles and stands strong against all odds.

Take a look at his married life with her husband, Bruce H. Mann.

What is Elizabeth Warren Up To Now?

Elizabeth Warren, a 70-year-old U.S. Senator presented herself as a "consensus candidate" who could excite liberals without alienating more moderating voters.

On 13 February 2020, Warren was making the media rounds ahead of the New Hampshire primary while she bumped into a progressive Sirius XM radio show, Signal Boost.

Ms. Warren ended up as a fourth-place finisher in New Hampshire now at the great problem of receding from the national political conversation. Elizabeth's primary-night speech was not carried live by any of the major cable networks.

It was a story of a candidate who went through a crucial week unbending to the realities of a competitive primary happening around her. Subsequently, she showed little sense of urgency after a third-place showing in Iowa which was totally a disappointment even though it left her a contender.

The 70-year-old U.S. senator is still married to her longterm partner, Bruce H. Mann, professor of law at Harvard Law School. The cupid is united as a life partner for nearly four decades now. To this date, they live blissful married life without any rumors of divorce or extramarital affairs.

Even though, Elizabeth chose to spend the rest of her life with a professor she kept her first husband's surname. She is now a grandmother to her son's kids. This is second marriage to Bruce Mann but second to Elizabeth.  Despite being divorced from ex-husband, she still uses her first husband Jim's surname.

Elizabeth Warren got married to Bruce H. Mann, on 12 July 1980 and both have been together since. They both met each other in a conference in Florida in 1978 and two years later the pair got married. They are both supportive of each other and it's been more than 35 years since they got married.

Warren is a politician and Bruce is a law professor and her work has brought a lot of problems in her life but they both stormed the weather together. She also praised her husband for the unconditional support and even revealed that she was the one who proposed to him.

Talking about their meeting Bruce said that he was mesmerized by her. He said,

“I saw this woman talking to someone, and I was just captivated I just walked right over. She barely noticed me. It took a couple of days.”

Warren added on it talking about her thoughts about their meeting and said,

“When I proposed to him, he said yes. I bought a sundress that could double as a wedding gown, and 35 years ago today, I married Bruce “He’s always believed that if I wanted people to listen to my ideas, I might as well shout from the highest mountain I could find."

It is clear to see that the love between the two still remains and is as fresh as the time they met. The couple is happily living their lives with each other side by side.

Before Bruce, Elizabeth was first married to Jim Warren, her high school sweetheart from 1968. But like most high school love, they drifted apart and in 1978 she sought for divorce with him. Jim Warren is a computer engineer who happened to be the first one to code DNA comparisons.

Although separated, they had two kids named Amelia and Alexander when they were together. Her daughter, Amelia Warren Tyagi, is the co-founder of The Business Talent Group and chairman of a progressive think tank, Demos.

Also, See: Mary Calvi Married to a big Politician; Shares Three Children with him; See her Relationship and Affairs

She is married to film producer Sushil Tyagi, who has been criticized for his ties to a controversial Iranian filmmaker.

Other than her relationships, she is tied to a controversy concerning her heritage. The controversy dates back to when she was just started as a politician.

Her Republican opponent in the Senate Scott Brown accused her of fabricating a Native American heritage to gain an advantage in the labor market.

Don't Miss: See Beth Chapman's journey as an American Politician maintaining her role as a Wife and a Mother

Similarly, her former colleagues amplified Scott’s claims stating that her ancestry played a huge role in getting her employed. It also came up at the Democrat’s Senate run in Massachusetts in 2012 and in the 2016 presidential race, where President Donald Trump addressed her as “Pocahontas”.

Warren’s claimed of hearing her mother and grandmother tell her of their family had Cherokee and Delaware heritage. Her brother also collaborated on this claim but there have been no official documents to lay credibility to their claims. She also insists that she never used her heritage claim to gain an advantage.

There is also no concrete evidence to show that she used her Native American claims to gain an unfair advantage in getting teaching jobs. Whatever the case may be, we wish her the best in her future endeavors.