Home Article Fox news Julie Roginsky have a child. Who is her husband?

Fox news Julie Roginsky have a child. Who is her husband? 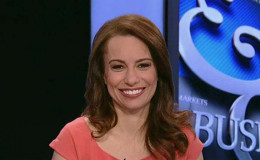 Who does not love a strong and independent woman especially when she is a single mother who knows how to take care of herself and her child(ren).

A woman who fits as a perfect example of that category is Julie Roginsky.

Julie Roginsky is an American-Russian television personality who is a contributor on Fox News Channel working as a co-host for Outnumbered.

She also works as an occasional co-host for The Five. She also has her columns appear in FoxNews.com, CNBC.com, Politico, Forbes and the Star-Ledger.

Everybody wants to know if an attractive woman is single or not especially if that woman is a media personality.

If a woman is popular, people automatically want to know about her love life if she has one but Julie has been able to leave people wondering about it for a very long time.

Julie has not really been linked with any personalities nor has she ever been spotted with one. In spite of being very active on her social networking sites, she has neither posted about her son nor about her husband or partner.

Julie Roginsky Has A Son

I do have a child and I have been appalled at how Monica Lewinsky was treated for the last 20 years.

Nothing is known about Julie’s romantic interest but we do know for sure that Julie Roginsky has a son. Julie gave birth to a child in 2012 and named him Zachary Peter Roginsky.

So this perfect example of the bold and beautiful gave her son her own last name and left us wondering who the father is.

The paparazzi has failed to find out if Julie has ever been married, divorced, engaged or even committed at all.

You're right. I'll be sure to stop making excuses for my imaginary husband.

Smart is attractive and attractive attracts a lot of attention. Julie Roginsky is one of those women who has been able to maintain a very low profile despite all the attention received.

Julie Roginsky is not just a pretty face. She has a post graduation degree in M.A. from the Boston University and is looking after herself throwing punches at everybody who gave her bad judgments without getting her hands dirty.

Personally, I think it is very attractive when a female can build herself in politics. Julie started her career in politics after she got hired to work in Emily’s List for the congressional campaign of Dale McCormick.

Julie has then built herself a great career and is now a founder and president at Comprehensive Communications Group.

She claimed that Ailes offered her a permanent position on The Five if she had a sexual relationship with him.

She settled the lawsuit in December 2017. Ahna O'Reilly is playing in a new movie depicting Roginsky's story on Fox News.