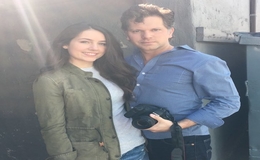 In a blink of an eye, Emma Fuhrmann turned into the girl we watched as Cassie Lang from the child we watched as Finnegan O'Neil. And, surely, with such as drastic transformation in just these little few years, we can feel it in our bone that Furhmann has even brighter future ahead of her.

Currently eighteen, Emma Furhman began acting at the tender age of just eight. And, since then, the Avengers: Endgame cast has succeeded with earning fans all across the globe, to say the least. Speaking of which, Emma surely has a lot of fans but does she have anyone special in her life?

When it comes to her personal life that involves dating life, of course, the Dallas born rising star is super secretive as she prefers to be. But, to answer the question to the fans wondering, Emma, who is also known for her appearance in other projects such as Chicago Fire, Home and Family, and The Magic of Belle Isle, is yet to find the special one.

After all, Fuhrmann is still too young, and with all these boys who are already crushing on her, it's obvious the guy that ends up with the actress will be luckier than the brightest star in the spring nights that gets the attention of everyone.

Speaking of which, love and relationship can certainly wait whilst the Lost in the Sun star has her priorities sorted out. As a matter of fact, career and her future is the only thing that Emma has her focus on.

Meanwhile, wanna find out how did Emma get the role of Cassie Lang, the highest-grossing film of all time that features Tom Holland, Robert Downey Jr., and Chris Evans?

Emma decided her fate before she could even solve the basic algebra problems in her class. Luckily, Fuhrmann had all the supports of her parents to embark on her acting career since the early days.

And, after taking baby steps and few appearances in tv series and films, Fuhrmann wanted to make it big in Hollywood. And, when she learned about the casting of Avengers: Endgame, Emma along with her family immediately took the flight to Los Angeles and signed up for it.

Seemingly, out of all the hopeful and aspiring girls who auditioned for the role, Emma was the one to grab the opportunity. And, not long after that, Fuhrmann's dreams came true and was working hard on the set of the record-breaking movie.

Impressively, the brunette hasn't stopped there yet. Emma is still strongly focused on her career with the hope to become the best version and the actress she can be.