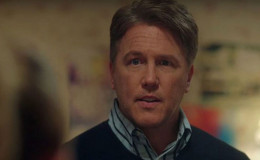 Lochlyn Munro, the White Chicks actor chose the acting career when a serious injury ended his dream of playing as a professional ice hockey star. Well, his decision meant to be the right one as he is one of the successful actors we know so far.

Besides his successful career, his personal life is equally prosperous. He has been living a blissful life with his wife and two children together. Let's get all the details about his family life and career in today's session.

Lochlyn Munro, 53, played in a number of roles and became a husband of many famous faces onscreen but what about his relationship status in real?

Well, most of you people might be obvious about the fact that Munro is a happily married man. He tied the knot to Sharon Munro in 1997 and since the very moment, they are inseparable.

The two women in our family who hold it all together.....strong, beautiful, independent, intelligent and loving. We are beyond blessed to have them. #Internationalwomansday

The couple shares two children who frequently appear on Munro's Instagram posts but the names of the kids is not revealed yet. Looking at his posts, it's pretty sure that he has a son and a daughter together.

Furthermore, he prefers going on vacations together with his family.

Yes! we all know that the Riverdale star is protective about his personal life, still, we wish to some more about his children in the upcoming days.

Munro faced a serious injury at an initial phase of his career being an ice hockey player that made him quit his passion forever. He started acting career and studied drama and improvisational comedy.

You May Like: Riverdale Actress Camila Mendes is Rumored to be Dating. Find out about her Boyfriend and Affairs

Me and my babe on date night! Thanks @Adele !!! pic.twitter.com/iTYzpUd4fd

In 1999, he performed the recurring role of Jack Sheridan in the second season of Charmed. Also, he appeared in Without A Trace, CSI, and CSI: Miami and CSI: NY and performed his best.

He appeared as Hat Cooper in Riverdale in 2017 and he is currently filming The Murders as Michael Huntley.